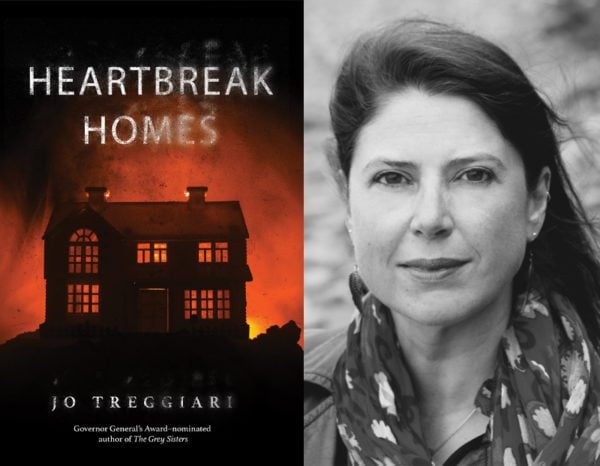 Heartbreak Homes, the stunning new YA mystery novel by Lunenberg, N.S., writer and bookseller Jo Treggiari, begins with a house party. It’s a scene that will be familiar to most readers – there’s a lot of social awkwardness, keen class and social-group divisions, underage drinking and drugs, some furtive sex, and a fight. But this house party has a critical difference: the setting is an empty house, the showpiece of a failed housing development that has brought economic ruin to the small town. Malcolm, who is hosting the party, is the developer’s son.

Lurking in the background are four uninvited guests, a group of homeless girls that includes Cara, the de facto leader, who are seizing the opportunity to steal from the rich: “Wealthy teenagers were perfect targets. They thought they were safe from all the bad shit. That they were above all the hardships of life. And the ironic part was, they wouldn’t miss anything we took from them. They’d instantly replace it with the newer model.” The party ends with the discovery of a murder victim, alongside a badly injured young woman.

It’s a powerful start to a powerful book, handily introducing the setting, the characters (and their divisions), and, most crucially, the three protagonists that guide the reader through the complex plot: Frankie, who is attending the party in support of her best friend Jessa (and hoping not to lose her to a new, more popular clique); Martin, now an outsider, who has been forced to change schools following his father’s failed investment in the housing development; and Cara, whose story emerges over time. The use of three distinct narrative voices is critical to the success of the novel. With independent but interweaving storylines and amateur investigations, evidence is allowed to accrue naturally and realistically, gradually building to a grand – and genuinely surprising – final revelation.

Heartbreak Homes works not only as a first-class mystery but also as a deft examination of class differences in a small town, and the impact of adult decisions (and losses) on younger members of a family. Reminiscent of the first season of Veronica Mars, the novel will appeal to YA readers and any lover of a good mystery, regardless of age.