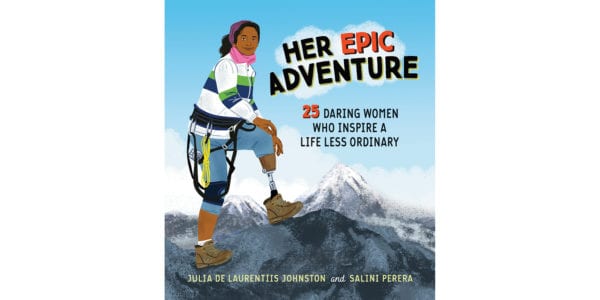 Toronto journalist Julia De Laurentiis Johnston’s biographies of intrepid women celebrates a refreshingly diverse group of accomplished trailblazers from around the world and throughout history.

The succinct and spirited entries are organized into five sections: Sky, Peaks, Ice, Land, and Water. With the exception of Amelia Earhart, most of the adventurers included are not well known – but should be – such as Arunima Sinha from India, who became the first woman amputee to climb Mount Everest; Jimena Lidia Huayllas, an Aymara woman from Bolivia who scales the highest peaks of South America; and the Black Mambas, an all-female anti-poaching unit in South Africa. Canadian Sarah McNair-Landry, the youngest person to travel to both the North and South Poles is featured, alongside contemporaries such as Maya Gabeira, a Brazilian surfer who rode a 20.72-metre wave in Nazaré, Portugal, in 2020, setting a Guinness World Record.

Award-winning podcast director Julia De Laurentiis Johnston’s enthusiastic writing reads like conversing with a savvy mentor who knows the score. Johnston draws much-needed attention to these extraordinary feats while also calling out the gender biases, stereotypes, and barriers these women had to overcome. Parenthetical asides pepper the text – “Ugh,” “Eye-roll emoji,” and “But we know better!” – to cite inequalities.

Empowering and encouraging, the well-researched profiles clearly show “what people – all people – are capable of.” Intriguing sidebars position readers in the middle of the action, sharing expert tips on how to survive an avalanche (the direction your spit falls will show you “which way is up … and out!”) and climb with a prosthetic (“Move at a pace that feels safe and comfortable – this goes for climbers of any ability!”).

Inspiration is also drawn from those who paved the way, with a “Did You Know?” box pointing out that Mae Jemison, the first Black female astronaut, brought a photograph of Bessie Coleman, the first Black female pilot, with her into space. Salini Perera’s striking illustrations foster this sense of personal connection; for example, Perera shows Coleman standing confidently in front of her plane in a self-designed uniform of military jacket and breeches. Gazing directly at the reader, this portrait conveys a powerful message: “I refused to take NO for an answer.”