Her Name Was Margaret:  Life and Death on the Streets 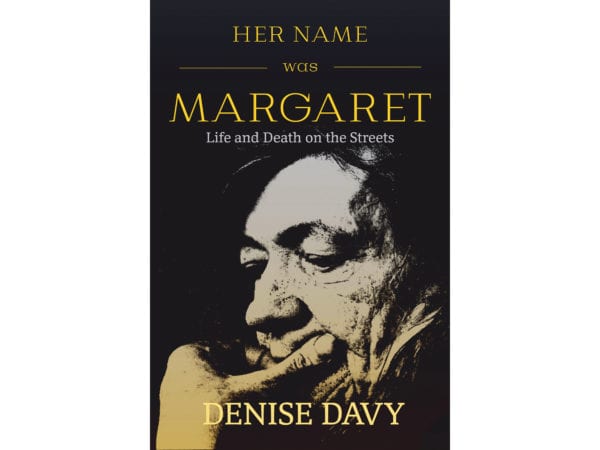 In January 1993, Denise Davy met a woman whose brief acquaintance would shape the next two-and-a-half decades of her life. Davy, then a reporter for the Hamilton Spectator, was spending the night at a shelter as part of her research for a story about homelessness in the city; it was a beat she’d covered before, but she felt that the statistics and studies she’d cited in previous articles needed a “face.” She found that and much more in Margaret Jacobson.

Margaret’s story forms the backbone of Davy’s new book, Her Name Was Margaret: Life and Death on the Streets. With access to extensive medical files from the Hamilton Psychiatric Hospital, interviews with family and friends, as well as some general journalistic sleuthing, Davy is able to create a fairly substantial timeline from Margaret’s birth in 1944 to her sudden death in 1995. As she details Margaret’s early life with strict evangelical Christian parents, her many encounters with various psychiatric facilities, and her eventual slip through the wide cracks in her city’s social safety net, Davy adds as much context as possible to help readers understand both the familial and systemic barriers that precluded Margaret from accessing the support she needed.

She focuses particularly on the mid-century deinstitutionalization movement, which saw a huge reduction to the number of beds available for psychiatric patients in Canada. Although deinstitutionalization’s goals were commendable – to reintegrate people living with mental illness into the community rather than locking them up in wards that were often filthy, overcrowded, and abusive – the resources necessary for this transition were never implemented and, as Davy makes clear over and over, this policy is directly linked to the increase in homelessness seen in Canada over the past several decades.

Davy is a skilled writer, and, like any gifted journalist, she’s able to communicate dry facts in a digestible and engaging fashion. Margaret’s story shows the unique ways in which one person was failed by a system that was supposed to support her, and Davy uses it as a jumping-off point to draw a broader portrait of how various government policies are actively harming large numbers of vulnerable people. She also details programs that have successfully reduced homelessness in various cities and offers suggestions on how they could be more widely applied.

The one troubling aspect to Her Name Was Margaret is the lack of interviews with those directly affected by homelessness. Davy does include a few quotations from Margaret at the beginning, but otherwise her life is mostly told through medical notes and interviews with those who knew her. Davy has also fleshed out Margaret’s story with insight from various experts in the sector, and while those opinions are valuable, it’s hard not to feel that they tell only part of the story.