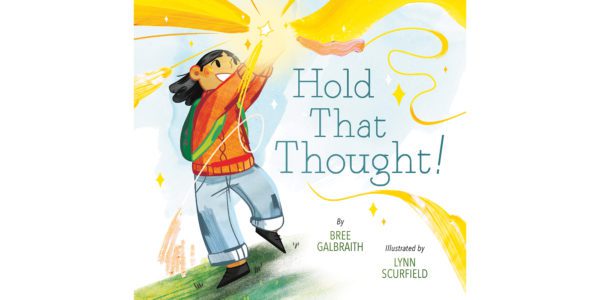 The story begins with Finn waking up in the middle of the night with an idea. The illustrations depict the idea as a glowing, yellow swirl that looks part constellation, part otherworldly plant, and Finn is excited to show it off at school. After a minor setback with a peer, all of Finn’s classmates add personal touches to Finn’s idea in the form of multi-coloured swirls, resulting in an ethereal rainbow bird.

While Galbraith builds anticipation around the development and growth of Finn’s mystery idea, it’s only described with vague language such as “the idea looked a bit like a plan, sort of like a point … but mostly like a possibility.” This does little to illuminate the actual process of ideation for young readers. The concluding visual metaphor of the bird is lovely, but a more concrete end result (a group project such as a community garden, for instance) would have more successfully shown children how collaboration can have a real-life impact.

Scurfield rises to the challenge of illustrating the abstract idea and uses it as an opportunity to further Finn’s character development. The idea zips and curls energetically through the air just as Finn remains optimistic and driven to give their idea life outside their own mind. It’s a rich portrayal of a child whose use of a gender-neutral pronoun isn’t central to the story. Scurfield helps make the conceptual text feel more celebratory and relatable with bright colours, rich textures, and a classroom of children from all different backgrounds.

Despite what the title may imply, Hold That Thought! encourages kids to express their original ideas and make constructive contributions, even if the message may be too heavily cloaked in abstraction for some.