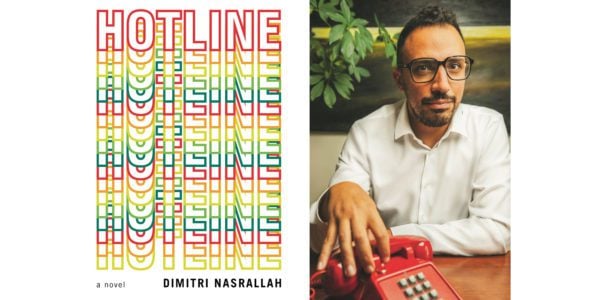 Dimitri Nasrallah’s Hotline connects the reader to Muna Heddad, a widow and recent immigrant from Lebanon, as she navigates Montreal’s cold and lonely streets – which are cold as much from the unwelcoming disposition of its people as from the weather.

Muna has come to Canada with hopes of being a French teacher only to find that no one will hire her because of her accent. After not hearing back from employers despite months of job-hunting, Muna is desperate. Her desperation leads her to accept a position as a phone consultant at Nutri-Fort, a weight-loss program. At the Nutri-Fort office, Muna becomes Mona, a skilled adviser whose callers are eager to sign up as clients based on her suggestions; they are even more eager to talk to someone who will not judge them.

But as soon as she steps outside the office, Muna returns to being a young, widowed mother who struggles to overcome the exhaustion, alienation, and uncertainty that often come with moving to a new country. Muna endeavours to manage these feelings while trying to provide for her son, grieve the loss of her husband, and process the war back in Lebanon that took him away from her. However, as in her search for a better job, Muna is unsuccessful.

Nasrallah (who is also an editor, journalist, and translator) relates Hotline entirely from Muna’s perspective. Small details – Muna code-switching between French, English, and Arabic; the Arabic phrases that punctuate both her inner monologue and outer dialogue; the rhetorical questions she often asks herself – pull us into her character and journey.

They also allow readers to better understand the adversities that often accompany the immigrant experience in Canada. The most significant of these is the lack of recognition for foreign credentials and work experience; this often leads to insecurity in employment and finances, which can bring about further types of insecurity in turn. There is the loneliness that follows from the physical separation of immigrants from their family or friends, and the emotional distance that eventually emerges between immigrant parents and their children. Last, but no less devastating, there is the difficulty of making new friends given the cultural and language gaps that exist – and the condescension these gaps sometimes inspire in the native-born toward new Canadians.

Inspired by the real-life experiences of Nasrallah’s mother, Hotline intertwines hope and sorrow to create a moving story that sears the heart, as Muna’s love for her child motivates her to overcome every obstacle in her way, no matter how large. Nasrallah has written a poignant, powerful tale that pays tribute to the numerous sacrifices and accommodations immigrants make for the sake of a better life in a country that doesn’t always return the favour.