House of Dreams: The Life of L.M. Montgomery 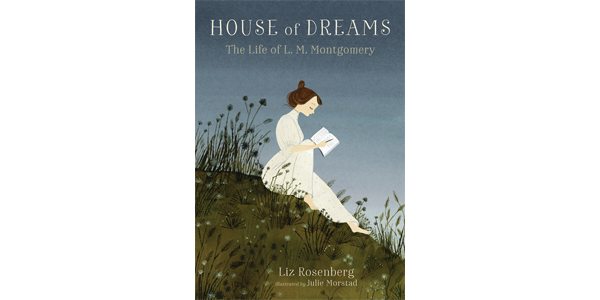 People travel from all over the world to Prince Edward Island to visit the place where L.M. Montgomery grew up, to see where her most famous novel, Anne of Green Gables, takes place, and to feel a connection to its heroine, Anne Shirley. In doing so, it’s easy to forget that author and her creation are not the same thing.

While Montgomery encouraged autobiographical connection with her fiction, it’s crucial for anyone writing about her life to see the limits of this facade by acknowledging that while her experiences informed her work – which includes her extensive life writing – we will never know her whole story. And that’s the way she wanted it.

In House of Dreams: The Life of L.M. Montgomery, New York writer Liz Rosenberg efficiently tackles the author’s struggles to be accepted by her family, her secret engagements, and her battle with mental illness, as well as the uncomfortable circumstances surrounding her death. This is the first biography for children that addresses the possibility of suicide – which many academics and readers have difficulty discussing. While Rosenberg seems to consider Montgomery’s death to have been the result of an accidental overdose, she nevertheless provides readers with a sense of the ongoing debate.

Instead of photographs that accompany a standard biography, House of Dreams includes art by award-winning Vancouver illustrator Julie Morstad, whose drawings are able to illuminate the facts and fictions in Montgomery’s life.

Morstad’s illustrations – reminiscent of the work of early 20th-century artists Helen Sewell (Little House series), and M.A. and W.A.J. Claus (the original Anne of Green Gables) – add emotional depth to Rosenberg’s text, showing Montgomery’s isolation, rebelliousness as a young woman, and the social constraints experienced as a minister’s wife and as a mother. In the first drawing, Montgomery’s small acts of non-conformity are demonstrated by her writing while sitting barefoot on the windowsill, her boots kicked to the side. In many of the early images, a cat appears nearby (perhaps representing Montgomery’s creativity and playfulness), but it does not appear in the latter half.

The last two images – a haunting portrait of Montgomery, her back to the viewer, facing the ocean and a final drawing based on her first author photo – exemplify the juxtaposition between what we think we know of the author and who she truly was.

Thoroughly researched, and complete with a suggested reading list and a timeline of Montgomery’s life, House of Dreams is an excellent introduction to the author and her work. While some readers might be surprised to learn about her mental illness, they will also be inspired by how Montgomery used her writing to find beauty and, as Rosenberg notes, provide “laughter and joy for others.”