★I Don’t Want to Know Anyone Too Well: Collected Stories 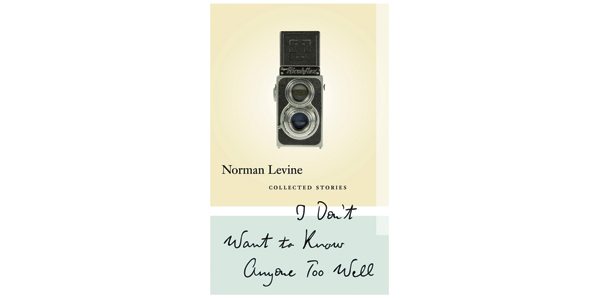 Norman Levine (1923–2005) was raised by Orthodox Jews in Ottawa and received his education in Montreal. But he was born in Poland and spent much of his life in England, where he married, started a family, and became a writer. Which is to say that Levine was not really all that Canadian in the first place (his adversarial relationship with the country is on view in his 1958 memoir/travelogue, Canada Made Me). Yet by choosing exile – a status he felt suited his vocation – what might be regarded as Levine’s fundamental Canadian-ness became fortified. Levine’s short fiction, collected in I Don’t Want to Know Anyone Too Well, cannot help but be read as emblematic of our national literature. It is the work of an observant outsider regarding landscapes and buildings, places and culture, others and self.

The collection’s title is ironic in that intimate connections abound in Levine’s stories, yet this title is also indicative of a sensibility shaped by comfort with distance and exclusion. Levine’s protagonists are forever curious about another class, another generation, another place or culture; about alternative choices that might have resulted in different outcomes.

Levine’s early stories tend to be shorter and more performative, employing humour so dry it may not even qualify as humour, and marked with arresting elisions and idiosyncratic phrases: “I was riding away to war in a taxi.” “The feathers, they sleep with you like another person.” “Until he met me he thought everyone in the world was a Catholic.” The later stories are more expansive, patient, and comprised of larger swaths of time while simultaneously closing in on death. In “Soap Opera,” for example, the narrator ruminates that “whenever I go to a new place and walk around to get to know it, I inevitably end up in a cemetery.” Or take the final lines from “The Ability to Forget,” which was also Levine’s final story: “People disappear. And that’s that.” By the time you reach the end of I Don’t Want to Know Anyone Too Well you feel as though you’ve been through something: decades of experience doled out in fictions.

The uninitiated might not understand how literally to take this. One reads several stories, nearly all of them written in the first person, all of them with the same tone, making the same highly distinctive observations. It’s easy to wonder if there is a major flaw in this otherwise masterful prose: the voice in Levine’s stories is always the same, no matter the narrator. Then one realizes that the narrator is always the same, no matter the name, and every narrator resembles Levine himself: male, Jewish, from Ottawa, McGill educated, a veteran, married to an Englishwoman, long indigent before finding success as a writer. Fiction is for Levine a vehicle for something very much like autobiography.

In an essay called “Kaddish,” which functions as a sort of afterword to I Don’t Want to Know Anyone Too Well, John Metcalf writes, “Norman’s stories … are unusual in that invention is not his real interest: a little judicious rearrangement is often as far as he’s prepared to go.” As with A Manual for Cleaning Women, the recent collection of Lucia Berlin’s stories, part of the pleasure of reading I Don’t Want to Know Anyone Too Well is in traversing the span of a life by reading the stories extracted from it. The stories in this volume are more or less sequenced to mirror events in the author’s life, endowing the book with a transcendent arc, a meta-coherence – the movement of memoir filtered through the collage of multiple self-contained narratives.

This emphasis on fiction as a means of self-examination should not obscure Levine’s profound interest in others, however much he may despair at our inability to communicate. “By a Frozen River” brims with encounters with transients. “Grace & Faigel” shows the narrator striking out with younger women because of misunderstandings regarding changing sexual mores. “Because of the War” considers the enigma of causality, how people enter and exit our lives under the illusion of choice or destiny. Several narrators visit ailing mothers; these stories are unspeakably tender. Levine’s narrators often enjoy the company of people no one else seems to like: the title story has the narrator hosting an annoying Australian radio broadcaster who has predilections for shoplifting and offering unsolicited marital advice.

On that note, the one character in Levine’s life we never get to know too well is his wife, who died of cancer when Levine was 50. This fact is noted in several stories, in which grief is ever-present but never dwelled on. But the wives in Levine’s stories, while commenting on the action, are seldom described in detail and rarely play active roles. This should be considered not neglect, but rather self-preservation – Levine’s way of saving something for himself alone. I can’t help but feel, however foolishly, that I got to know Levine from all that he reveals over the course of I Don’t Want to Know Anyone Too Well. But I’m most moved by those vast territories of experience he chose to leave out.