If Walls Could Speak: My Life in Architecture 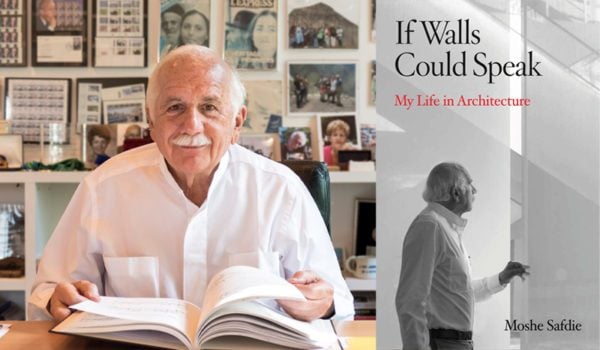 While still an adolescent living in Israel, Moshe Safdie once received a report card in which his teacher wrote: “Moshe is unable to control his spirits.”

Now, in his 80s, Safdie still cannot be contained, his “spirits” soar with innovative, experimental architecture that bedazzles some and confounds others. We see that pattern repeatedly in Safdie’s informative, entertaining memoir, If Walls Could Speak: My Life in Architecture.

A citizen of Canada, the United States, and Israel, Safdie became famous in his twenties with Habitat 67, the Expo 67 signature project in which 158 pre-fabricated residences, each with its own small, sunny garden, were stacked 12 storeys high along the Montreal waterfront. That world’s fair project was followed by such celebrated structures as the National Gallery of Canada in Ottawa, the Yad Vashem Holocaust History Museum near Jerusalem, the Crystal Bridges Museum of American Art in Bentonville, Arkansas, and the multi-towered, multi-purpose Marina Bay Sands Integrated Resort in Singapore, which has become the symbol of that city much like the Eiffel Tower shouts Paris.

If Walls Could Speak is not an autobiography. Personal details are scant; we hear of Safdie’s first wife, Nina, only in passing, after several years of marriage. A few more details are revealed about wife number two, Michal, a photographer. We do, however, get a jargon-free, conversational-style monologue on the many successes – and failures – of an architect who has created projects around the world, and who, despite being an Israel-friendly Jew, has been courted by Muslim autocrats hoping to land a unique Safdie creation in their country.

Almost every project – dating as far back as the 1960s – that Safdie highlights in the book is narrated as a movie-worthy drama that involves high-stakes politics and finance, friends made or lost, creativity unleashed or quashed. One movie would show Jackie Onassis and Henry Kissinger in the 1980s leading a march in New York’s Central Park to protest Safdie’s planned nearby development because it would cast shade on some areas of the park. The project was cancelled. Another movie would show Safdie being wooed by the wife of the Shah of Iran to build an audacious housing project in Tehran. The Islamic Revolution put an end to that.

Among his boldest projects was a Dubai mosque designed as a large sphere nestled in the crook of a giant Islamic crescent moon. The project floundered, Safdie writes, because of the 2008 financial crisis. About half of his proposals are never built. Some lose competitions, but even winning proposals can remain unbuilt because of political and financial reasons unrelated to his design, according to Safdie.

A former Montrealer now living near Boston, Safdie sees architecture as a vehicle to improve the lives of people. That belief drove Habitat, a style much publicized but rarely replicated. The principal design elements of Habitat are finally, half a century later, being emphatically embodied in some of Safdie’s Asian mega-projects, such as Sky Habitat in Singapore and Habitat Qinhuangdao in China. These are multi-use residential-commercial projects with elevated, street-like passageways and parks that are like mini cities.

For Safdie, his dreams about more and more Habitat-style projects are his “unfinished symphony” – a symphony springing from that youthful uncontrolled spirit.