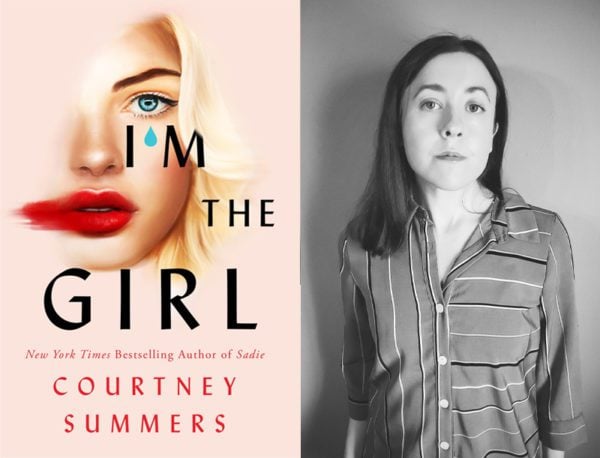 Since the death of their mother to cancer, 16-year-old Georgia Avis has been living with her older brother for more than a year and doing whatever it takes to make ends meet. She dreams of becoming a famous model and using Aspera, the exclusive members-only resort just outside of town, to launch herself into the spotlight. When she discovers the brutalized body of 13-year-old Ashley James on the side of the highway near the resort, she falls in with Nora, Ashley’s older sister, on a quest to find out what happened to the girl. Georgia soon finds herself an Asperan girl on the path to getting everything she’s always wanted, but her dream quickly turns nightmarish once she is deeply entrenched in a world of wealth, privilege, secrets, and impunity – seemingly with no way out.

In the time of the #MeToo and #TimesUp movements, I’m the Girl is an unflinching and at times ruthlessly graphic commentary on power: on those who wield it, and those who bear the consequences. With its non-linear timeline, the book almost reads as two separate novels: a murder mystery and an intense thriller centring on the objectification of women, coming of age, and the loss of innocence.

Bestselling and award-winning author Courtney Summers is known for her provocative novels featuring female protagonists who shine a light on uncomfortable truths, and I’m the Girl is no exception. Georgia’s character is immature and naive, and, as a reader, all you want to do is rescue her from her obtuseness. However, this is the brilliance of Summers’s writing: what happens to Georgia in her quest to be loved and valued – in the only way she believes she can be – is simultaneously subtle and blindingly obvious. Summers deftly showcases the nuances of a queer teen exploring her sexuality in ways that are and are not safe, and how the difference between the two may not always be obvious to the individual.

I’m the Girl is gripping, raw, brilliant, and beautifully written, and although perhaps not an enjoyable read, it is a vitally important one. At the end of the book, readers are left questioning whether to accept the power structure and the (lack of) consequences for the powerful and wealthy – or to demand change.