★Immoral, Indecent, and Scurrilous: The Making of an Unrepentant Sex Radical 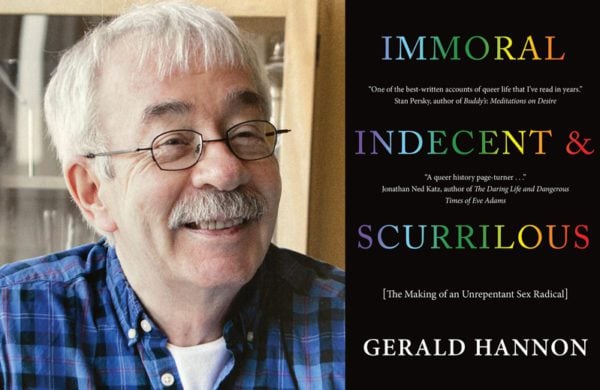 “I keep few secrets,” writes activist and journalist Gerald Hannon. This proves true in his frank and refreshing memoir, Immoral, Indecent, and Scurrilous: The Making of an Unrepentant Sex Radical. A titan of Canadian queer history, Hannon provides an engrossing account of his life, clearly demonstrating one of the characteristics that got him into so much hot water: an unflinching honesty.

The late Hannon, who received medical assistance in dying in May 2022 after a protracted illness, was initially best known for a controversial 1977 article about intergenerational male sex. His book’s title comes from the charges laid against him and two other officers of the queer publisher Pink Triangle Press after its groundbreaking gay-liberation journal, The Body Politic, published Hannon’s feature article entitled “Men Loving Boys Loving Men.” They were charged with “use of the mails for the purpose of transmitting or delivering anything that is obscene, indecent, immoral or scurrilous.”

After his work with The Body Politic, Hannon became a sought-after freelance journalist known for his profiles of public figures. This led to work as an instructor in the journalism program at Ryerson (now Toronto Metropolitan) University. Although he was a popular teacher, his success was short-lived. A reporter from the Toronto Sun called and asked Hannon if he moonlighted as a sex worker. Hannon, characteristically, told the truth: the answer was yes. His teaching contract was not renewed.

Immoral, Indecent, and Scurrilous blends the personal and the political. Hannon revisits key events in Canadian LGBTQ+ history in which he played a role, including the earliest sex-positive responses to the AIDS crisis and the 1981 bathhouse raids, adding that he was a regular bathhouse patron “for the ease of it all.” He also discusses his entree into sex work as a means to both supplement his income and engage his sexual-liberation politics, one client at a time.

The author’s long-time experience in magazine journalism is evident; he has an eye for detail and the prose is readable and engaging, punctuated by lively physical descriptions of the principal players in the story. Hannon relies on recollections, published articles, and journal entries to recapture key moments in his past. In one poignant section, he describes being a member of the care team for a dying friend, the poet, academic, and AIDS activist Michael Lynch. Elsewhere, he recounts comedic moments from his exploits in sex work.

Hannon had his quirks. When describing people’s appearances, he doesn’t hesitate to employ unflattering descriptors – but he extends this critical gaze to himself, describing his own looks as “porcine.” And he commonly mentions the penis size of friends and acquaintances – at least when it is large. Readers should expect candour on all matters sexual in these pages.

Immoral, Indecent, and Scurrilous is a memoir of both uncommon viewpoints and uncommon bravery in expressing them. But Hannon denies any heroism, or even altruism, noting that “there is a benign selfishness at the heart of most activism.” After reading this convincing summary of his accomplishments, a reader might beg to differ.