In Praise of Retreat: Finding Sanctuary in the Modern World 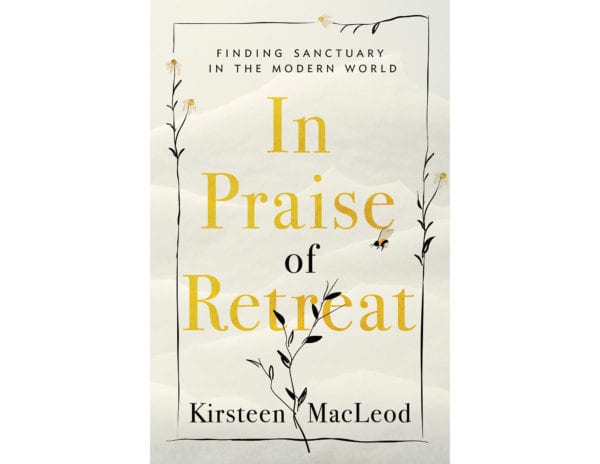 Kirsteen MacLeod went to the woods because, like Thoreau, she wished to live deliberately. She also went to a hermit’s stone cottage in Scotland, a former convent in Quebec City, a famous shrine in Brazil, and various yoga retreats. These experiences form the backbone of MacLeod’s new book, In Praise of Retreat, a collection of essays – mostly personal – about the concepts of retreat, sanctuary, and solitude.

MacLeod believes that solitude is both much needed and undervalued in our society, a belief that was cemented after her purchase of a remote cabin in eastern Ontario. There, she discovered the bliss of being utterly alone. Ever since, she’s been exploring the social, religious, and cultural history of retreats, as well as immersing herself in the ways that retreat is practised around the world.

The bulk of the resulting book is organized into chapters about well-known types of retreat: the hermit’s seclusion, monastic life, pilgrimages, writing retreats, and so on. MacLeod experiments with each practice – more or less – and these experiences form the jumping-off point for each essay, followed by an overview of where the practice comes from, notable people who have participated in it, and how it has changed to exist in the modern world.

MacLeod’s writing is clear, and her love for quiet, green spaces shines through in lyrical passages about life at her cabin. Her curiosity and passion make for engaging reading throughout the historical sections of each chapter. Unfortunately, she struggles to find the balance between the personal parts of her essays and the rest of the subject material. Because of this, In Praise of Retreat feels somewhat uneven. The first section – a personal essay about her cabin and an essay about the concept of retreat – is repetitive.

The book hits its stride once she begins exploring the different forms of retreat, but even these chapters skew heavily toward the personal instead of the more interesting historical information. It doesn’t help that MacLeod is self-admittedly “judgy,” and her personal disdain for the religious aspects of some of the retreats lends an unfortunate bias to those sections. As well, her attempts to secularize religious practices tend to flatten her experience of them; her time in the hermit’s hut or at the former convent doesn’t seem significantly different in the quality of the solitude than the stays at her own cabin.

In spite of all that, In Praise of Retreat has some wonderful moments. The chapter on artists is particularly delightful, rich with anecdotes about well-known writers either loving or loathing the solitude of writing retreats. Here, MacLeod lets her judgmental instinct slip away and allows herself to fully enjoy her subject. It’s a book worth reading, one that would make a solid addition to a cottage bookshelf, to be pulled down and riffled through by lamplight on quiet summer nights.