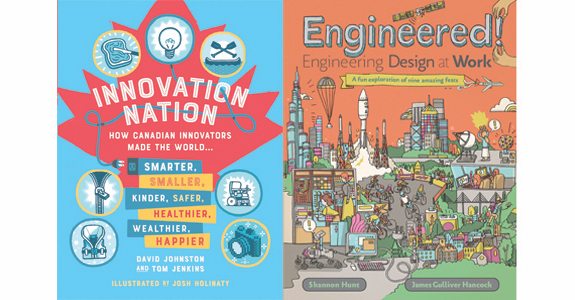 In a world full of Gordian knots, “innovation” has become an all-too-easy and overused buzzword. But in two new non-fiction books, we see how engineering and inventive thinking make a real difference to life in Canada and around the globe.

Innovation Nation, by former governor general David Johnston and innovator/entrepreneur Tom Jenkins, reminds us just how ingenious Canadians are, despite our golly-gosh-shucks tendency to downplay our accomplishments. From traditional First Nations and Inuit ingenuity to modern-day tech breakthroughs, the book’s chapters point out how our world is that much smarter, smaller, kinder, safer, healthier, wealthier, and happier thanks to Canadian innovations.

Giving each invention its own double-page spread, Innovation Nation offers engaging did-you-know-style tidbits on everyday objects like lifejackets, light bulbs, and garbage bags. Plus, we learn that ideas can strike at any time. One inventor got inspired to create a new metallurgy method by “tooting” in the bathtub; a goalie created the hockey mask after a taking a puck to the face; a garbage collector invented the blue box to fight back against landfill. Bright illustrations by Josh Holinaty swirl around each page of text to evoke the brilliance and fun of curiosity.

In Engineered!, accomplished science writer and editor Shannon Hunt celebrates the heroism of engineers. We get swept up in the exciting and well-paced storytelling about how NASA landed the Mars Rover on the red planet and how two Californians named Steve created a personal computer revolution. Seven other tales illustrate the impact of biomedical, chemical, mechanical, electrical, civil, and environmental engineering.

Engineered! does a solid job of inspiring global thinking as well as instilling pride in Canadian achievements. A University of Calgary engineering team is held up as an example of leading-edge thinking in geomatics (the science of solving environmental challenges with GPS technology) and University of Toronto engineers are lauded for their innovative 3D skin-grafting technology.

Both books help to frame real-world problems as solvable, and suggest the path to innovation is a bit of a thrill ride. Engineered! presents a complex seven-step approach to the engineering design process – from defining and investigating a problem to testing, optimizing, and sharing ideas – while Innovation Nation breaks it down into a simpler four-step, big-picture operation. The former offers a design symbol key throughout to guide the reader, but the latter feels more accessible to a young audience, posing reflective questions to help readers see how they can stick with their ideas and inventions.

Innovation Nation and Engineered! spark a feeling of hopeful possibility and will empower aspiring innovators to see their aha moments through to action.