Into the Open: Poems New and Selected 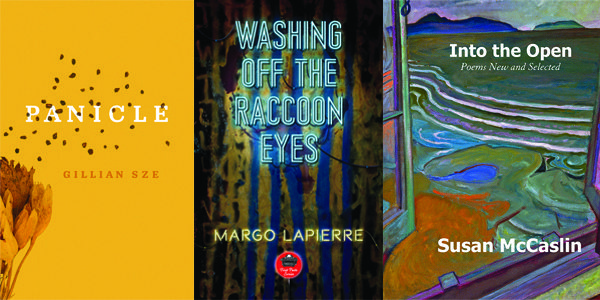 The word “panicle,” which serves as the title for Gillian Sze’s fifth collection of poetry, refers to a branch with many clusters on it. It’s an apt title for this stellar work. In four discrete sections, Sze’s focus sweeps across the natural world, intimate relationships, and the literary, visual, and performing arts – and does so with the gentle and confident touch of a calligraphist.

Indeed, the first poem in this collection is called “Calligraphy,” and it is deft and stunning: “To write heart in our language takes only four strokes, but so much / depends on the first mark.” This section alternates between lyric poems that examine the domestic (yard work, road trips), and more conceptual “sound” poems that freely associate about a range of aural stimuli (water flowing, a key falling). These two approaches, which typify the overall musicality of the work, make for a pleasing, multisensory experience.

The book’s second section plays with perspective, including one poem written from the point of view of a tree: “you take the hatchet to me / with the attentiveness of a lover.” The third section contains a suite of poems accompanied by visual art – an approach that works here, because it extends the integration of the senses, adding a visual aspect to the aural and verbal elements. The final, eponymous section comprises a lush and gorgeous long poem that circles back to the beginning, albeit from a different angle: “people grew alphabets / and found a way / to make voice / into marks / just so we could see / sounds.” Sze has produced an exceptional collection – unique in viewpoint, impeccably researched, admirably restrained, and brimming with heart.

Washing Off the Raccoon Eyes, by Margo LaPierre, is a debut collection that features “girls creased at the corners, an / honest map.” Alienation, recreational drug use, and sexual encounters are dealt with in a direct manner and without shame. The title alludes to removing a veneer of makeup, and the free verse poems in this book serve the author’s quarrel with artifice by not relying on the fussiness of formal constraints.

While largely narrative, the poems are often unclear in their internal chronology and overall intent. Titles sometimes compound confusion, rather than clarify. “Talking to Frank” begins with a character’s anxiety about having rung a doorbell: “He sees people like you everyday, / looking to sober up.” An expectation is stirred that this is a therapeutic appointment; it turns out to be a kind of after-hours sex den where very little conversation occurs.

Unfortunately, LaPierre’s collection contains a number of troubling lines, such as: “For a trans night: Church Street, red light. / For all your voodoo needs, the Chinese / store in Kensington.” (Toronto’s Church Street is not a red-light district, and Chinese people do not practise voodoo.) This, along with recurring ableist metaphors of blindness, muteness, and deafness, combine to undermine the reader’s trust and generosity. Poetic licence should never be read as carelessness.

LaPierre’s collection does contain some standout pieces, such as “Junkie Poem” and the award-winning “Bear Skin Rug,” which are as musical as they are unequivocal. If only the same degree of care was apparent in other poems.

Susan McCaslin’s Into the Open: Poems New and Selected features work from the poet’s 14 previous books and a forthcoming collection, Lineage. McCaslin is a metaphysical poet by way of the Romantics. A touchstone is Blake, to whom she wrote a book of letters: “I can’t make it go away just by looking at it / differently, or writing a poem, though I am sure / poetry and language are transformative.” McCaslin has done an excellent job of choosing poems that bounce off one another and propel this substantial collection forward, while making the discrete periods of her career apparent. A particular highlight are the poems from Flying Wounded (2000), which revolve around McCaslin’s mother’s mental illness. McCaslin approaches the specifics from different vantage points – a poem in which her mother is catatonic, a sonnet that stipulates her mother “didn’t want to talk or face the wall,” and a hugely moving poem about the suffering woman’s religious delusions: “Now she is saying God-light has / permuted the fissures of her brain.” This religious fixation has an enormous effect on the reading of McCaslin’s oeuvre, rooted as it is in Christian mysticism. The poems highlight an ongoing, unresolved tension between mere acceptance and transcendence.

McCaslin’s writing also has flashes of humour, as in “Hades’ Gym,” in which the title figure “self-medicates by hanging out at his gym / over the door of which posters blare: / ‘Don’t wait for the Grim Reaper.’” Later poems in the collection are odes to a range of influences (Cézanne, Lao Tzu), and to influence itself.

Mystics, by definition, make things look simple, because we can’t possibly guess what has been shed to get to the place they have arrived at. They’re mystics because we’re not. But lines like “Nothing divine charges a fee / Everything is charged with love” are profound enough that any reader can recognize they were earned. Reading Into the Open is a rewarding encounter with an original voice and likewise with the sublime.