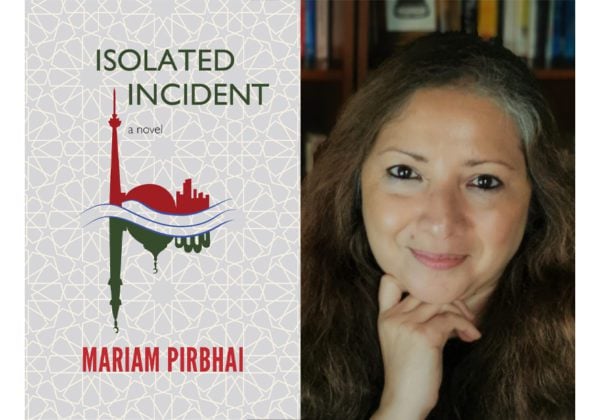 An anonymous individual approaches a nondescript storefront in a strip mall in Toronto’s Rexdale neighbourhood that houses a mosque. They smash its windows, its entrance door, and dent the sign above it. With red spray paint, they scrawl graffiti on the mosque’s exterior that labels visitors as “terrorist scum” and warns both them and any passersby to “Go back to where you came from. Our home is not your home and native land.” The individual then lights a Quran on fire and throws it, along with a letter that elaborates on their painted messages, inside the place of worship they have just vandalized.

This is the titular incident in Mariam Pirbhai’s Isolated Incident, which – as demonstrated throughout the novel – isn’t actually an isolated occurrence. It is one in a series of similar events, made possible thanks to a state that promotes and normalizes hatred and mistrust toward an entire group of people: Muslims. As smaller acts of hatred are dismissed as insignificant, individuals are emboldened to commit bigger and potentially deadlier hate crimes.

These small acts of hate can take the form of an educator emphasizing a perpetrator’s Muslim identity when discussing their crimes in class – as experienced by Arubah Anwar, one of the novel’s protagonists – or a group of teenagers harassing a Muslim woman on the bus to take her headscarf off. They can look like the police treating Muslim men, or men who appear to be Muslim, as persons of interest and trailing them – as they do to Kashif Siddiqui (the novel’s other protagonist) when he stops at a gas station – or dismissing victims who try to report hate crimes.

Isolated Incident is set in Toronto’s Rexdale and North York neighbourhoods, with a brief detour to Montreal. The narrative alternates between the perspectives of Arubah and Kashif, with diversions into the viewpoints of Arubah’s friend, Marisol Martinez-Hamid; Kashif’s mother, Kauthar, who is suffering from cancer; and Frank Snyder, a middle-aged retired cop whom Kashif meets during one of his mother’s chemotherapy appointments.

The different perspectives reveal the struggles of each character to balance their culture, faith, and identity while dealing with loss – of loved ones (either suddenly or by slow degrees), of health, of personal safety – and a country that constantly others them. The novel illustrates the plurality of Muslims, illuminates the big and small ways Islamophobia shapes their daily lives, and ultimately urges the reader to interrogate and unlearn the ways in which they might uphold prejudice.

To borrow a metaphor from one of its characters, reading Isolated Incident is not unlike receiving a series of pinpricks that ultimately form a bruise in the reader’s heart, reminding them of their relationship to the deeply rooted Islamophobia in Canada.