It Doesn’t Matter What We Meant 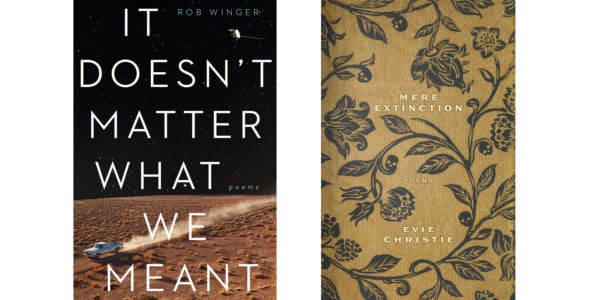 Rob Winger’s It Doesn’t Matter What We Meant and Evie Christie’s Mere Extinction are the latest contributions to a genre I’m calling GTA pastoral. Each offers lyric meditations on a gritty urban present populated by, in Christie’s words, “bare-knuckled bankers of King Street” and “meat-eating Annex Vegans” alongside nostalgia for a suburban past, filtered through a 21st-century middle-class outlook, in which as Winger puts it, “We can’t really move back / to the last subway station, can we?” Both collections demonstrate the enduring tenacity of the free-verse lyric as the default poetic frame for contemporary experience. While Christie’s book presents these lyrics as discrete events in an ongoing pattern of reflections on motherhood, love, crisis, and poetry itself, in Winger’s collection, these lyrics accumulate at times into longer sequences that pose the challenge of conceiving human existence on a cosmic scale, in which “all the radio signals / we’ve ever heard are still out there.”

If pastoral evokes a nostalgia for a childhood spent among idyllic rural spaces, in these GTA pastorals such spaces are industrial areas now in decline. Such as the smelters and factories of Winger’s sequence “Escarpment,” the “beyond out-of-sight crack houses / later bulldozed,” or the “wraparound background” of Christie’s “Boundary,” in which “Netflix and Prime half-emptied / the parishes.” These pastorals also present Gothic twists, in which Winger depicts the cruel sadism of children who “hurled painted turtles into pitch” or “crushed the perfect shells of crickets,” and Christie presents a mother haunted by “[d]regs of my middle-class history / pursuing me even as I owe back rent.” Curiously, both poets appropriate the words spoken to them by neighbours as found poetry, Winger titling a poem “Thank God You’re Normal” – words spoken by his new neighbour upon their first encounter – and Christie incorporating phrases like “hey, great car” and “do we know you from hockey?” uttered by neighbours clothed in “L.L. Bean vests” buckled “to the chin.”

The title of Mere Extinction captures the general tone and structure of the poems, a kind of stoic nonchalance in the face of disaster, both personal and collective. Winger’s It Doesn’t Matter What We Meant suggests a similar lassitude, raising the question as to whether “meant” in the title is a transitive or reflexive verb: is it the meanings we intend that don’t matter, or is it the meaning of ourselves? The final poem of his collection, “What We Meant,” is dedicated to Matthew Zapruder, whose 2017 book Why Poetry? advocates for a more straightforward approach to reading poetry. While the observational and anecdotal style of both collections makes each receptive to the sort of reading Zapruder advocates, they also offer complications. Winger’s poems employ non sequiturs throughout, which paradoxically suggest the interconnection of everything, as in the opening lines of the first poem: “When I talk, again, about Voyager 1 / out there beyond the heliosphere, / what I really mean is that / none of us recalls the birth canal.” Christie presents a shifting dance of pronouns throughout her collection; she seems particularly attached to the second person and how it lends uncertainty to the lyric perspective. Such an address – who is the “you” who “find[s] salvation in the strip club blow your PhD friends bring by,” for example? – creates an effect of shared introspection and self-analysis, not so much the indulgence of confession as a claim of (or a search for?) affinity.

A sense of the poetics of each writer emerges through the poets they acknowledge or cite in their collections. For Christie, these include Philip Larkin, Seamus Heaney, and Margaret Atwood; for Winger, Phyllis Webb, John Ashbery, and Dionne Brand (whom he also thanks as his editor). They extend and transform some of the more memorable lines of the poets who have come before. Alluding to the opening lines of Atwood’s Power Politics, Christie insists, “No one is weighing up a hook and an eye / (Any hook, any eye) around here.” Winger’s “Red Truck Treaty” takes the perspective of the “man in the red truck” who haunts Brand’s “I Have Been Losing Roads.” Winger’s sequence captures the anger, anxieties, and resentments of white men whose privileges and entitlements are being challenged at this moment, who “thought, by now, we’d have cottages / and Cadillacs, like our grandfathers did,” and whose cultural legacies and inheritances are “part of history is all.”

The concluding lines of Winger’s collection – “I’d like to think it doesn’t matter / what we meant” – suggests poems present less a shared experience than the coordinates of one, waiting to be populated to each reader’s specificities. No doubt due to the realities of publishing schedules, none of the poems in these collections address our contemporary experience under the pandemic. And yet both collections speak uncannily to our current crisis, in their respective insistence on finding humour, beauty, resilience, and, yes, meaning in a world which continually reminds us of threats beyond mere extinction.