Jamilah at the End of the World 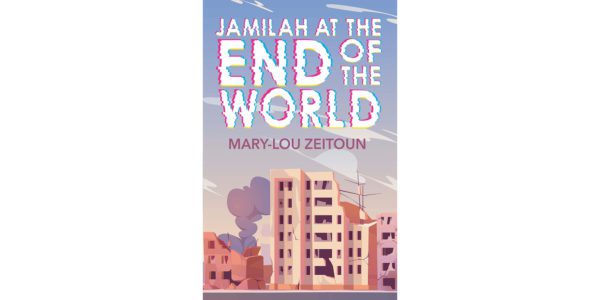 Thanks to David Suzuki and a news clip about a “Totally Awful American Hurricane,” 17-year-old Jamilah Monsour is convinced a climate disaster is imminent. She starts stockpiling supplies and converts her family’s garage into a bunker for when climate change knocks out Toronto’s power grid. Unfortunately, her family just doesn’t understand.

“If you knew what we went through back home,” Jamilah’s father, an immigrant from Palestine, says. Compared to bombs, power outages, and a cut-off water supply, Jamilah’s fears seem too abstract to stress over, perhaps even a luxury she can afford only because of her relative privilege. Leila, a Syrian refugee child that Jamilah babysits, gives advice for her bunker, saying, “Ours was very clean,” in a sobering reminder that in some parts of the world, children are too busy trying to survive daily life to worry about global warming.

Climate change anxiety is, however, relatable, as is Jamilah’s feeling of helplessness. She’s tried traditional forms of activism, attending protest marches with her sister, Noor, but couldn’t deal with the crowds. And as supportive as her parents want to be, they have good reason to refuse her suggestion to use her college money to purchase a generator.

When a citywide blackout, which is caused by strain on the transmission lines from a heat wave, leads Jamilah to encounter a climate-change-protest encampment, we share in her relief and joy at meeting a community of like-minded people. Chatting with the protesters one-on-one gives Jamilah strength to push past her comfort zone and explore other ways she can make a difference.

Climate anxiety is serious, but Jamilah’s witty and at times downright hilarious narration keeps the novel light-hearted. Her mission to stock a bunker is interspersed with less apocalyptic concerns: partying with friends, sibling rivalry, and observations about her west-end Toronto neighbourhood. And despite Jamilah’s seriousness in stockpiling AA batteries and cans of tuna, she’s unable to resist eating the Lärabars meant for the bunker while she watches sitcom reruns on her phone.

Jamilah at the End of the World is a coming-of-age story, an intergenerational immigrant family tale, and a call to action all in one. Jamilah’s determination to save the world will likely resonate with many readers, as will her deep understanding of the enormity of the task. But ultimately this is a hopeful story, and as Jamilah comes to learn, she doesn’t have to be alone in the fight.