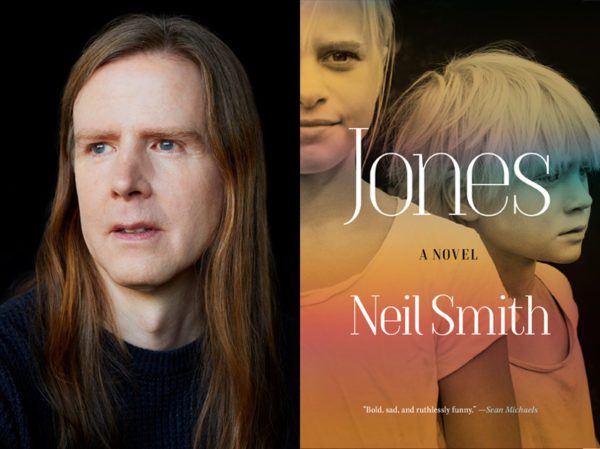 Humour abounds in Jones. On practically every page, there it is.

“Gerbils are rats with better PR,” opines Joy Jones. She’s called Brassy Broad by her teenage daughter, Abigail, who possesses “the long, straight, wheat-blond hair of a Charles Manson disciple.” Joy, “five six and skinny … lives on coffee and cigarettes.” In a household of smokers, Eli, Joy’s 11-year-old son, “plans to take up the filthy habit one day.” He “sketches cigarette logos in a black notebook and obsesses over which brand to smoke.” The Joneses pursue the tantalizing dream of a real house and real happiness, but as the novel opens in the mid-’70s, the transplanted Montrealers reside in the Caboose, a one-story addition on the back of a rundown mansion in Massachusetts.

A traditional comedy of a kind, Neil Smith’s sophomore novel (following 2015’s Boo) even concludes customarily, with a festive wedding and a glimpse of a positively transformed social order. And yet: the suburban wedding, already grotesque, is turned into a travesty by the literal – powdery – residue of death; plus, the restoration associated with the comic genre – the ritual happy ending – is partial at best, and completely topsy-turvy. Though Smith might have begun with the raw material of a comedy, the final result is something else altogether. If freeing, hopeful joy is a constitutional element of the genre, Smith’s unique take comes closely partnered with a resonant bellow of rage, pain, and grief.

The novel opens with the Joneses as dogged Canadians living abroad for work. The parents, Pal and Joy, routinely squabble, and accuse one another of various wrongdoings. Bright, troubled, and prematurely jaded, siblings Eli and Abi develop coping strategies such as codes and invented languages. The “Great Escape,” their vision of an adulthood in Manhattan where they’re wildly successful and utterly untouched by the failings associated with the senior Joneses, keeps them happily preoccupied. They know it will materialize shortly after the latest marital upheaval and dead-end pit stop (whether in Ontario, Utah, Illinois, or Quebec).

Jones follows the kids through puberty and into their twenties. Though they strive and scheme, the kids’ fortunes are far less upbeat than their abiding hope for fame; their ability to slough off the past – easily and completely, like a reptile moulting – proves equally impossible.

Brittle, vindictive, and strangely committed to her disastrous status quo with Pal, Joy remains a handful for Eli and Abi. Pal – on-and-off sober, on-and-off stable, and mostly an erratic mess – is something of a deluded dreamer in the Willy Loman mould, if Miller’s tragic salesman were also a deceitful narcissistic alcoholic with a closetful of skeletons and a loathsome sexual interest in one of his children. He’s villainous, a charismatic monster disguised by hard-luck stories. Despite their intelligence, Pal’s kids are no match for his canniness.

Spanning about two decades, the novel outlines how the Great Escape actually turns out. Bisexual Eli keeps his parents at a distance – and Abi, too, when her behavioural extremes and addict’s volatility become unmanageable. Yet family, including a brother of Pal who deals heroin, always comes knocking.

While there’s a deft and appealing lightness of tone that says “beach read,” the chapter-by-chapter progression introduces unease, a chilling sense of impending disaster.

After a series of terrible events rendered with notable wit, Smith leaves off on a tentative upswing: yes, horrors can breed horrors, the novel suggests, and human weakness, depravity, and senselessness can never be overestimated. One can survive, though, and that resilience is evident right here: a novel, dedicated to a sister, with a character who takes on an artistic project dreamt up by their absent sibling.