Kat and Meg Conquer the World 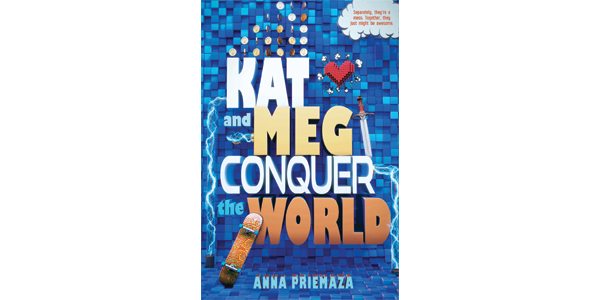 Anna Priemaza makes her YA debut with a thoroughly readable story involving mental illness that’s neither preachy nor despairing. Kat’s anxiety makes it painfully difficult to connect with new people, while Meg’s ADHD has alienated her. Brought together by a year-long science project, Kat and Meg bond through a shared love of an online gaming star whose YouTube videos provide them with an escape from the challenges of Grade 10. What follows is a frothy but heartfelt tribute to fandom and female friendship.

Told in alternating first-person chapters, the novel explores Meg’s feelings of rejection (she’s angry that her stepdad, who helped raise her, didn’t seek custody when he and her mom divorced), and Kat’s trials as a hyper-anxious new kid at school. The development of their friendship is skilfully rendered: growing from awkwardness and curiosity into giddy camaraderie, punctuated by spikes of occasional misunderstanding – and underlined by fierce loyalty.

Priemaza’s humorous tone keeps things light. Describing her move from Toronto to Edmonton, Kat explains, “I’m a freshman again because Alberta and Ontario hate each other. … ‘High school should start in grade nine,’ says Ontario. ‘No way, loser, it should start in grade ten,’ says Alberta – for no reason other than to be spiteful.”

The girls’ friendship is tested and enhanced by secondary relationships: Kat tentatively flirts with another online gamer while Meg, who’s not a gamer herself, struggles to hold on to a real-life boyfriend. Both girls also form a touching connection with Kat’s grandfather, who imparts nuggets of wisdom with twinkle-eyed snark.

Meg’s ADHD occasionally seems caricatured. And at times the main characters present as younger than 16 – perhaps to better suit a middle-school audience. Also, the ending strains credibility. But this shouldn’t detract from the fact that Kat and Meg Conquer the World does the important work of inspiring young readers to consider life in another’s shoes, while reassuring many more that they are not alone.