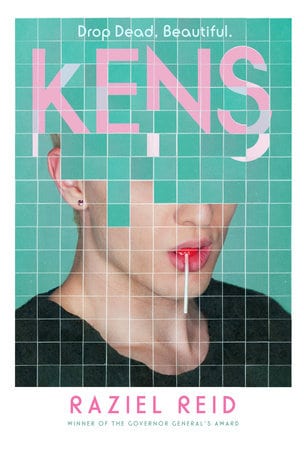 High school has never been so high – or so fake, gay, and deadly – as it is for the teens of Willows, Wisconsin, in Raziel Reid’s latest YA novel, Kens. This follow-up to his Governor General’s Literary Award–winning debut, When Everything Feels Like the Movies, once again shows Reid’s talent for evoking a certain kind of shiny, filthy glamour.

Willows, the fictional hometown of plastic pop-culture icon Barbie, is reimagined by Reid as a carnivalesque playland for uber-popular gay high-school senior Ken Hilton and his sidekicks Ken Roberts and Ken Carson. With the help of Hilton’s corrupt cosmetic-surgeon father, all three Kens have been nipped and tucked to resemble Barbie’s main squeeze. When Hilton asks his dad to build him yet another Ken, the ensuing makeover of shy fellow student Tommy Rawlins seems at first like a gayer, bloodier version of a classic YA ugly duckling trope. But Reid plays every scene against these sorts of expectations, and his high-camp magic realism blends with the sheer edginess of his choices, creating a book unlike anything else on the YA shelf.

While his first novel looked inward, to the tragic delusions of a bullied queer teen, now Reid projects similar wishful/awful logic out onto the world. He imagines a bizarro America where football jocks pretend to be gay to gain social status, parents feed their kids PrEP and Percocets, and authority figures cower in the face of the Kens’ social media stats and their fierce crop tops. Fabulousness trumps everything: homophobia, yes, but also friendship. So it’s no surprise that the Kens quickly delete post-makeover Tommy from their social life – he could never have lived up to their rigorous standards. But when Tommy’s retaliation backfires, and backfires again, the lines between good and bad, bully and victim, even murder and suicide, are obscured by the constant stream of likes and faves from the Kens’ online fans.

This parade of silicone, vodka, and violence easily holds our interest, but the work is not (merely) a celebration of youthful depravity. At its core, Kens is savage satire, and the problems of the real world – teen suicide, anti-black police violence, and school shootings – intrude into this over-the-top town in ways that do (and ought to) make us deeply uncomfortable. In some moments, Reid pushes so far past propriety and good taste his social critiques become blurred. But he also opens up a space where we are forced to consider not just his macabre fantasia, but our macabre realities. Kens gives us both a rose-coloured Snapchat filter and a funhouse mirror.

Raising issues while raising eyebrows, Kens comes to life in this space between the terrible and the beautiful, and asks: if both are fascinating, how can we tell the difference between them?