★Kinauvit?: What’s Your Name? The Eskimo Disc System and a Daughter’s Search for her Grandmother 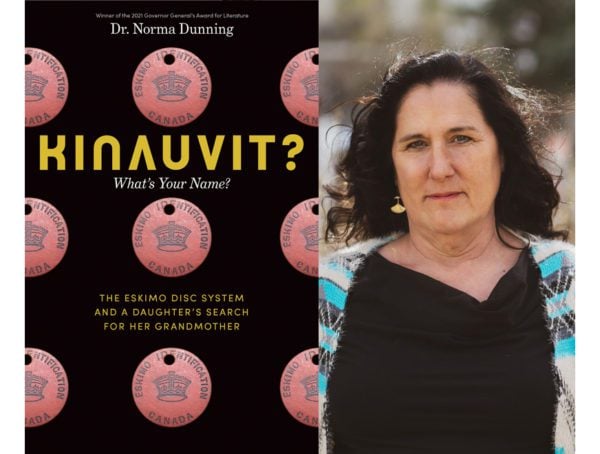 “The naming of a child for Inuit is ceremonial,” writes Norma Dunning in her new nonfiction work Kinauvit?: What’s Your Name? The Eskimo Disc System and a Daughter’s Search for her Grandmother. She describes how family members would traditionally gather around a birthing mother and chant the child’s name together. “That name is sung to the child as they are arriving into the world,” she writes. “A name is the most important item that an Inuk child will carry.”

The significance and beauty of Inuit naming traditions stand in stark contrast to the focus of Dunning’s incisive, deeply researched book: the Eskimo Identification Canada system. Perplexed by Inuit names, which they found hard to spell and pronounce, the federal government assigned each Inuk a plastic disc stamped with a five-digit number. They were required to carry it at all times and present it on demand; one Inuk woman remembers census takers asking the Inuit only for their numbers, not their names.

The disc system was implemented in 1941 and lasted for three decades, but chances are you’ve never heard of it. Dunning, an Inuk scholar and author, who won the 2021 Governor General’s Award for her story collection Tainna: The Unseen Ones, meticulously reconstructs the history of the disc system and its subsequent omission from Canadian memory. It lasted for only a generation, but the disruptive and dehumanizing legacy of the disc system continues to impact Inuit families to this day – including Dunning’s.

As a child, Dunning’s mother told her that their family was French. Only as an adult did Dunning learn that they were Inuit, and that her mother was a residential school survivor. After having children of her own, Dunning applied to the Nunavut Enrolment List – but her application stalled when she was unable to produce her mother’s disc number, nor her grandmother’s. The absence of those records, and the inexplicable influence it wields over the validation of Dunning’s Inuit identity, set her on a quest to understand the disc system.

Kinauvit? is a fascinating and original work of nonfiction, combining historical research, ethnography, personal memoir, and interviews with Inuit elders. Dunning weaves Inuktitut words throughout to explain Inuit values and cultural concepts, underscoring that colonial efforts to replace language are by extension efforts to erase an entire system of meaning. Dunning is Padlei Inuit, and she writes that prior to the disc system they were known as “the people of the willow,” because they lived among the willow trees of the Keewatin region in what is now northern Manitoba. “To call or name one another based on distance from one another or the landscape that surrounds them contains so much beauty and accuracy,” she writes. “There is no beauty found in being known by a number on a string.”

Dunning’s research into the disc system spans years, in tandem with her journey to reconcile her own Inuit identity. When she goes to interview Martha, an Inuk who remembers the disc system, she dresses in old sweats, afraid to look like a “snobby, university Inuk.” She’s surprised to see Martha dressed beautifully, her hair and makeup carefully done. “She dressed for me,” Dunning realizes. Her gentle, revealing conversations with Martha and other Inuit provide insight not only into the disc system, but also the traditional upbringing that Dunning, who was raised “south of 60” by a mother who concealed their Inuit identity, didn’t have.

Beginning in 1971, the disc system was replaced with a new initiative, Project Surname, which required every Inuk to register a last name. (The Inuit, like other Indigenous peoples, did not have surnames prior to colonization.) This system was confounded by members of the same family picking different last names, and a followup initiative called Project Correction required family members to take the same name. Through her research and interviews, Dunning captures the spirit of resistance and resilience displayed by the Inuit. Though they were vastly outnumbered and out-resourced, they refused to yield entirely to the assimilating forces that assailed them, instead engaging in sly and subversive forms of resistance: in one village, a frustrated administrator noted there were three women using the same first and last name.

By charting the various government efforts to regulate Inuit existence, which were discarded without acknowledgement or apologies, she demonstrates how Inuit families and communities were scrambled by haphazard and self-interested meddling. One elder named David Serkoak recalls how the government relocated his family four times in the late 1950s, airlifting them and dropping them without food or supplies. These relocations were framed as “voluntary migrations” to help the Inuit return to a state of self-reliance, but their true purpose was to populate Northern borders to establish Canadian ownership of the politically valuable territory. Many Inuit died of starvation and exposure as a result of these forced relocations, which only ended in 1958. Dunning was born the following year. The recency of this callous indifference is breathtaking.

And yet Dunning and her subjects are calm and reflective when describing their experiences. Anger is not an emotion commonly expressed by Inuit, and Dunning isn’t motivated by outrage. The book, she writes, explores the need for tukitaaqtuq, an Inuktitut word that means, “They explain to one another, reach understanding, receive an explanation from the past.” Canada has persistently sought to overwrite Inuit narratives with its own stories. With Kinauvit?, Dunning reaches into the past to understand the story of her life, and assembles a rich and multifaceted history told, at long last, by the Inuit themselves.