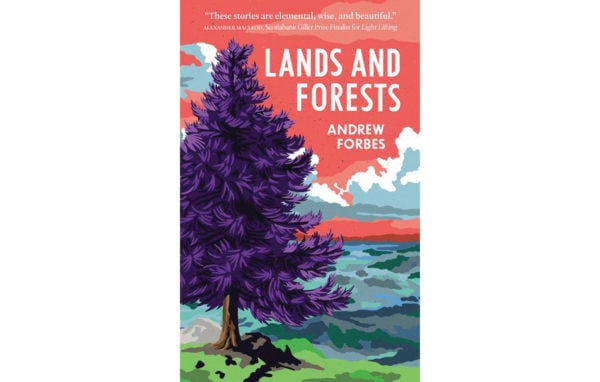 “[H]e was bound to a life shaped by fire,” ruminates a character in the title story of Andrew Forbes’s second short-story collection. Fire persists as either a literal or figurative force of destruction throughout Lands and Forests: homes and wooded areas burn, but so too do lives and relationships, often as a result of incendiary men who cannot contain the infernos of their personalities.

Two pieces stand out. “Graceland” tells the story of a photographer who moves back in with his estranged wife, Connie, after she is diagnosed with terminal cancer. While Connie’s life approaches a painful, undignified end, the narrator’s life takes off: his business becomes lucrative when he begins using a drone to take breathtaking photos and video of luxury homes for sale. Forbes does an excellent job juxtaposing the majesty of these aerial shots with Connie’s messy, humiliating decline, and he draws the two threads of the story expertly together in an emotional climactic scene.

In “Broadcasting,” Forbes unwinds a meaty tale about an erstwhile radio DJ, Russ, who leaves Canada with his daughter in the hopes of landing a job in Yuma, Arizona. The radio gig doesn’t work out, but he stays anyway, taking on construction work, making friends with his neighbours, and convincing his on-again, off-again lover, Shona, to join him in the U.S. We watch as Russ and Shona’s relationship disintegrates, and Russ moves back to Canada, only to lose everything. This episodic story doesn’t quite hold together, but we can forgive Forbes for the technical flaws, which are compensated for by the emotional journey he takes us on.

Unfortunately, not every entry in the book has the same heft. “Emmylou” is about two men who go skinny-dipping and scare a group of women campers. “Fortunate People” focuses on a potentially disgraced academic who goes to live with a colleague and his wife. And “Ex-Father” is another entry about yet another menacing man. All three of these feel too underdeveloped to really resonate. Still, Forbes works hard to track the landscapes of the human heart in this eclectic album of stories.