★Laura Dean Keeps Breaking Up with Me

It’s the colour scheme that grabs you first in Mariko Tamaki and Rosemary Valero-O’Connell’s Laura Dean Keeps Breaking Up with Me. The pages are predominantly black, white, and grey except for splashes of the most beatific shade of peachy-pink, which perfectly accentuate the bittersweet quality of this story of high-school heartache and friendship. The colourful touch first appears on falling balloons at a 1980s-themed dance; elsewhere it’s the background of a speech bubble that simply reads, “sob,” and later it pops up in the toppings on a pancake. There’s no rhyme or reason to its presence, yet this singular colour becomes an anticipated comfort throughout the entire story.

After a run of well-received superhero comics for Marvel and DC, award-winning author Tamaki (Skim; This One Summer) makes a triumphant return to the YA graphic novel form with a narrative that feels louder and prouder than her previous genre works.

Set in Berkeley, California, the LGBTQ story revolves around a group of friends who are popular and confident and trying out different relationship scenarios. Frederica “Freddy” Riley is agonizingly in love with the wrong person. Laura Dean is cool and aloof – that “I’ll hang out with you if nothing better comes up” kind of girlfriend. Being involved with Laura is giving Freddy a Charlie Brown level of angst and gullibility, and she starts to treat her friends like crap – blowing them off to make herself available to Laura’s whims. As Freddy focuses on how to keep Laura from breaking up with her for a fourth time, she seeks the help of a medium and an advice columnist, while ignoring some pretty obvious cues from her closest friends, who see Laura for what she is – a player. 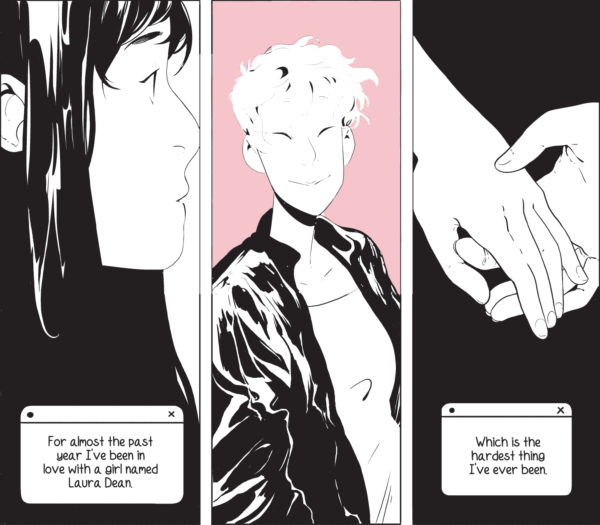 In their first collaboration, Tamaki and Valero-O’Connell have developed a sophisticated storytelling dynamic, which involves sparse dialogue pushing the narrative forward while detailed illustrative attention to body language and facial expressions provides the emotion. These characters are extroverted and speak astutely  about queer identity, but they are rarely verbose. When it comes to their feelings, they converse as they text: in quick, fragmented, listless shots of prose. The dialogue feels more authentic than most YA teen-speak, with characters holding back, not risking too much, worried about saying the wrong thing. Valero-O’Connell matches the verbal starts and stops with a multi-panel style that acts as a form of visual editing. At crucial moments – after long runs of brisk staccato dialogue – Valero-O’Connell pulls to a full stop in the form of text-less double-page spreads providing visceral and visual representations of all the pent-up pain, frustration, and passion.

Heartbreak aside, Laura Dean is also a love letter to Berkeley, which – in the novel at least – boasts a queer-friendly school curriculum and thriving LGBTQ community. Valero-O’Connell portrays the city as a peachy-pink palm-tree oasis with hipster donut shops, outdoor cafés, and starry skies that are nothing short of swoonworthy. That California glow gives Laura Dean Keeps Breaking Up with Me a distinct L Word vibe. And this graphic novel feels as fresh and exhilarating as that groundbreaking show did over a decade ago.