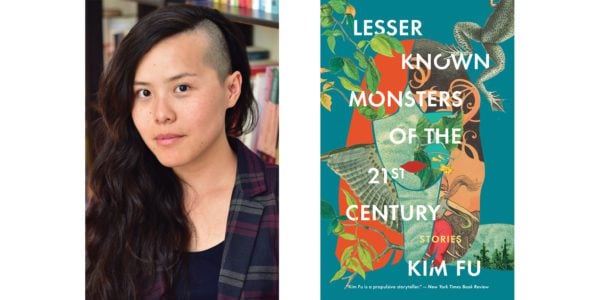 Kim Fu has always revealed a distinct creative vision. Her books – including For Today I Am a Boy, winner of the Edmund White Award for Debut Fiction – are marvels of craftsmanship and daring. The ways in which identity is formed and expressed, especially among the young and female, fuel her work.

Fu furnishes her first collection of short stories with the fantastic. In Lesser Known Monsters of the 21st Century, she also continues to explore autonomy, as well as grief and wish fulfillment. These 12 pieces – among them, tales of a seductive sandman and a world robbed of the sense of taste – suggest that, more than the supernatural, the real fiends are the private dramas of the everyday.

The fable-like aspects of her previous material, which includes the clever volume of verse How Festive the Ambulance, bloom on these pages. Distilling her interest in mixing the commonplace and the magical, “Liddy, First to Fly” portrays a group of young girls whose bond is strengthened when one grows wings on her legs. “The realm of pretend had only just closed its doors to us, and light still leaked through around the edges,” the narrator observes. “Everything was baffling and secretive then, especially our own bodies, sprouting all kinds of outgrowths that were meant to be hidden, desperately ignored and not discussed, hairs and lumps that could be weaponized against us.”

The drift from innocence also imbues “The Doll,” in which a group of children encounter mortality and share possession of a haunted figurine. Fu, a Canadian expat who lives in Seattle, writes masterfully about the dawning awareness of the vast wilds beyond adolescence.

Technology holds dark promise. In “Time Cubes,” a depressed woman becomes fascinated by boxes sold at a mall kiosk that seemingly bend time. In “Twenty Hours,” a husband and wife vent frustration by separately killing each other, only to produce new copies of their beloved with a special printer. After poisoning his wife, “I could clean the house, as a show of contrition,” the husband admits, “and when she returned to find me sitting at the shining kitchen island, knick-knacks in place on dusted shelves, a pot of soup on the stove, we might not even need to discuss it.”

Human interaction, with or without the surreal, is charged. As rich and absorbing as a novel, “June Bugs” details a woman’s departure from an abusive relationship to live in a beetle-infested rental home. Attending a memorial for a mountain climber she followed on social media, the protagonist of “#ClimbingNation” discovers sinister dynamics between the intimates of the deceased.

That Fu excels at short fiction won’t come as a surprise for readers of her novel The Lost Girls of Camp Forevermore. Tracing the lives of several women who were stranded at a sleepaway camp as girls, that book was built up through individual stories.

Lesser Known Monsters of the 21st Century demonstrates Fu’s command of the form. The speculative elements are all anchored by emotional gravity. Her unusual plots and nonconformist characters are drawn with incisive prose of great descriptive power, and they captivate even in miniature.