Let the Monster Out 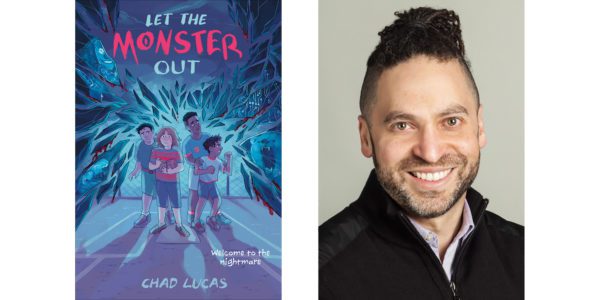 Feeling like a fish out of water is a daunting yet all-too-familiar experience, whether you’re the new Black kid that just moved into a predominantly white town or the child who’s grown up suspecting that the way you see the world around you is … different. This sense of alienation is the central focus of Chad Lucas’s latest novel, Let the Monster Out, which also deals with themes of racial prejudice, mental health, and overcoming trauma.

In trying to escape his deeply traumatic past, all that headstrong Bones Malone – one of the novel’s protagonists – wants to do after moving to Langille, Nova Scotia, is protect his family and baseball teammates. However, in fighting to protect his loved ones, he only hurts himself and those around him.

Meanwhile, after being incessantly bullied by classmates, meek Kyle Specks lives a sheltered, homeschooled life, limiting his interaction with kids his age to his baseball team. Even with his teammates he keeps quiet, living in constant fear of being rejected for his “weirdness.” Kyle believes he may be neurodivergent, but his parents shelter him from the diagnosis, afraid it will make him feel even more like a social outcast.

When these protagonists inadvertently get caught up in a conspiracy that involves a shady corporation turning Langille’s adults into dazed, emotionally volatile “zombies” (and giving the children bone-chilling shared nightmares), the unlikely pair must work together to save the town. In the process, they find companionship and learn to accept each other’s unique strengths and weaknesses.

While the novel’s witty dialogue and science-fiction mystery plot is sure to entertain, its true heart lies in its richly written, multi-faceted characters: Lucas gives readers the opportunity to enter the minds of not only the protagonists but also the novel’s secondary characters; he manages to place a sympathetic lens on almost everyone, even an egregious bully.

Lucas’s characters ring true because he is unafraid to expose the darkness behind the scars they bear. Whether it’s the fear of losing control or of being abandoned, Lucas lets the kids’ metaphorical monsters out in full force in the form of shared nightmares; their deepest insecurities are revealed not only to the reader but also to their friends. Seeing Bones, Kyle, and their friends accept and learn to confront their individual vulnerabilities together is a triumphantly uplifting experience. At its core, Let the Monster Out is a story of hope – about facing trauma head-on, but never alone.