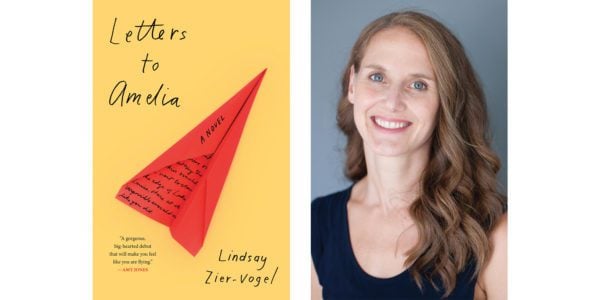 This debut novel by Lindsay Zier-Vogel begins with a breakup that’s as bewildering as it is agonizing. Grace Porter, a library technician at the University of Toronto, has built what seems to be a predictable and steady life with her boyfriend of nearly seven years. Until one Saturday morning, he tells her that he doesn’t love her anymore, packs a bag, and exits her life. There’s no fight, no other woman, no obvious signs that the end was coming – just this shattering declaration. To say that she’s left reeling would be an understatement.

Then, on her first post-breakup day of work, Grace is given an unexpected assignment. It seems that a box of Amelia Earhart’s personal letters has been discovered in a collection of papers donated to the library – letters that are unpublished and, apparently, unknown even to Earhart scholars. Grace’s boss asks her to read and summarize the letters, but warns her that it has to be kept top secret. She’s so afraid that information about their big find might get out before they can put together a proper launch (and get all the proper credit) that she forbids Grace from telling anyone, even her colleagues.

At first, Grace is ambivalent about the assignment. She doesn’t know anything about Earhart, and the letters, while interesting, are love notes written to the man with whom the aviator has been having a long-term affair; to Grace, they’re a bit like rubbing salt in her fresh wounds. To compound her misery, she’s saddled with a non-refundable, non-exchangeable ticket to Newfoundland for what would have been her seventh anniversary with her ex. She considers skipping the trip entirely, but after learning that Earhart had several connections to the island, she decides to turn what was supposed to be a romantic getaway into a research trip.

Newfoundland proves to be a turning point, a place where Grace deepens her connection with Earhart (to whom she begins writing her own letters, hence the title of the novel), as well as her connection with herself and her own wants and needs. Even when faced with an unplanned pregnancy that could upend the new life she’s building for herself, Grace draws strength from Earhart’s words and continues her steady journey toward independence.

Zier-Vogel spins an engaging story full of thoughtfully drawn characters and lively dialogue. The narrative itself is short, bordering on too short, and readers may find themselves wanting more. Grace herself is a bit of an enigma; we don’t learn much about her beyond her reactions to various crises, and it would be nice to know more about who she is outside these events. Then again, part of the problem Grace is trying to solve is a profound feeling of disconnection from herself, so maybe it makes sense that readers experience that too. That said, Letters to Amelia is a wonderfully readable book, and the only reason you’ll want to put it down is so that you can pick up your phone to do your own Amelia Earhart research.