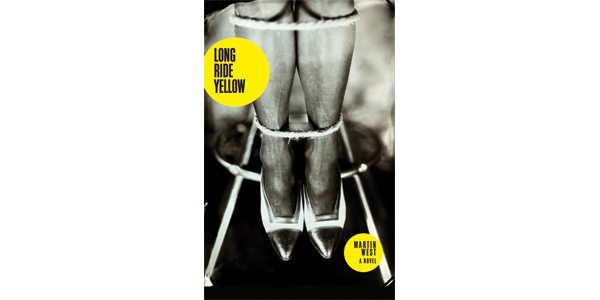 Nonni likes causing her sex partners pain. She’s also off her psych meds. And she’s being controlled by aliens. When her plaything, Daniel, turns up as a strangled corpse, mayhem ensues.

In his absorbing debut novel, two-time Journey Prize finalist Martin West continues to explore Alberta’s dark side, as in his 2016 story collection, Cretacea and Other Stories from the Badlands. Here, he examines mental health and sexual subcultures with a sensitive touch, eschewing luridness and stigma, and using his character’s psychosis to drive narrative experimentation. The result is part noirish thriller, part psychedelic acid trip, and part Venus in Furs.

To make things worse, Nonni comes to learn – from a smelly housebound nerd named Teddy – that her voracious sex drive is being externally controlled by a set of extraterrestrial entities called the Woodenheads, who eventually intend to turn her into an inanimate object. West retains the credulity of even a skeptical reader through effective pacing and inventive plot turns that reflect his character’s mania. She mutilates her body in an abandoned factory and has gloryhole sex with an alien in a disused shopping mall? Sure, why not? Meets a sexy waitress and later runs her over at a crosswalk? No problem: disbelief is suspended.

Through it all, Long Ride Yellow maintains a potent sense of place as the disaffected Nonni moves through Calgary on her hallucinatory mission of self-discovery, passing from trendy neighbourhoods through grungy ghettos that would be easily recognizable to locals. Other subtle references – including a glancing nod to tying up a character with Newfoundland twine – ensure we remember this is CanLit. But throughout, Long Ride Yellow is completely unbelievable and utterly captivating.