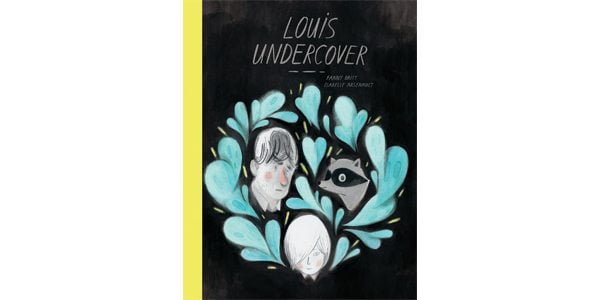 Fanny Britt and Isabelle Arsenault follow up their Governor General’s Literary Award–winning Jane, the Fox and Me with a second graphic novel collaboration of equal acuity. The titular protagonist of Louis Uncover is a perceptive 11-year-old trying to make sense of the complicated fragility of his world: “Nothing anywhere in my life is simple.” Narrating with melancholic savoir-faire, this weary observer matter-of-factly states, “You don’t need to be a rocket scientist to know that if my dad cries, it’s first and foremost because of the wine.” A reluctant spy, he notices other parental frailties he’s not supposed to see. Louis keeps a protective eye on his sweetly blithe younger brother, Truffle, spends hours with his steadfast friend, Boris, and is riveted by Billie, a confident classmate whom he secretly admires from afar, unable to summon the courage to speak to her.

In Britt’s nuanced, poetic writing (deftly translated into English by Christelle Morelli and Susan Ouriou), compassionate scenes show the complexity of alcoholism and its effect on the family. Nostalgic for the way things never were, Louis’s father invents “fake memories when he’s used up the real ones.” He self-sabotages, wallows in pity, and spirals through a repeated cycle of high hopes, broken promises, and the failures of relapse. During a separation, the dad makes an unexpected, late-night drunken visit to Louis’s mother’s Montreal apartment. She tells him: “We’ve all been ground to dust. Nothing but specks of dust.” When his father stops drinking, again, and takes the family on a curative trip to New York, everything seems perfect for a while. Louis tries to safeguard their tenuous happiness and keep everything under control. He knows things can change in a heartbeat, so he follows the mantra, “Don’t touch anything, don’t break anything.”

In Louis’s experience, emotions can get you into trouble and, inevitably, “Love ends badly.” With utmost authenticity, the trembling consumption of first love is eloquently conveyed. Bun-haired, book-loving Billie reigns supreme in Louis’s sight, as bewitching as “a rainstorm, a chocolate fountain, a silent queen.”

Louis is “glued to the spot,” paralyzed with doubt. Regrets weigh on him, including all the missed opportunities to connect with the object of his affection and, in particular, his inaction when a strange, glazed-eyed man on the street knocks Truffle off his scooter. In contrast, Billie is enticingly in motion: she stands up to bullies, pushes her glasses up on her nose and cycles away from the pettiness of the schoolyard on her cool, jet-black bicycle.

Arsenault’s exquisite, fine-lined pencil-and-ink illustrations have a distinctive blend of delicacy and strength. When Louis is ashamed, a thick smear of angry, black scribbles blots out the scene. Conversations between the brothers are relayed through handwritten speech bubbles, and Truffle’s guileless, looped script belies his curious, knowing questions. Occasional splashes of sunny yellow pop off the pages, illustrating the moments of optimistic light in Louis’s life, like his daydreams about Billie.

Louis’s voice is considered and sensitive, and his story explores challenging themes without a whiff of condescension. He comes to realize that courage has “not much to do with manliness and lots to do with danger.” Facing fears means being afraid but still taking steps forward, as when his father enters a rehabilitation centre. Instead of emulating the fantasy of an invincible comic-book superhero, Louis understands that being unmasked and vulnerable is true bravery. The final, hope-filled scenes show Louis following the winding, golden path to Billie by “putting one foot in front of the other, putting one word in front of the other.”