★Love from A to Z 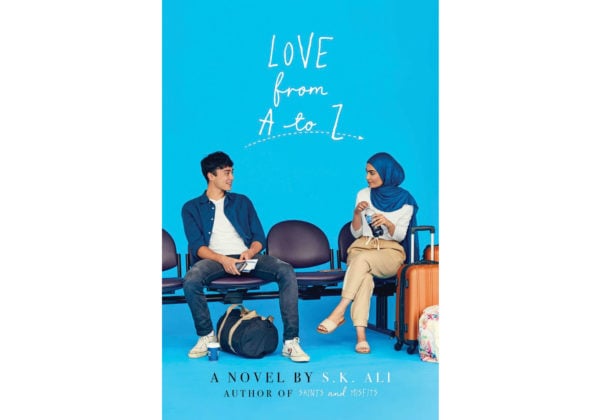 In her second novel, S.K. Ali strikes a balance between charming love story and issue-driven narrative, in which Muslim teen characters confront and overcome Islamophobia, racism, and ignorance. Love from A to Z follows protagonists Zayneb and Adam, who travel to Doha, Qatar – from the U.S. and the U.K. respectively – and are continually brought together by what Adam calls “serendipity.”

Zayneb Malik is a socially conscious, outspoken high-school senior whose passionate nature can sometimes get her in trouble. In contrast, university student Adam Chen is sensitive, quiet, and introspective. Despite the differences in their personalities, they discover an almost spiritual understanding of one another – adding a nuanced layer to the shopworn opposites-attract trope.

Love from A to Z is written in diary form; through the characters’ alternating entries readers learn that Adam is hiding a recent diagnosis of multiple sclerosis and that Zayneb is in the midst of an academic crisis after a confrontation with an Islamophobic teacher.

Adam’s health issue has him worried about his future and, as a way of coping, he’s isolating himself from the people in his life. Meanwhile, Zayneb is attempting to rein in her righteous anger in order to avoid more conflict; this includes backing down when two men police her swimming attire and biting her tongue when an acquaintance boasts about wearing a culturally appropriative outfit.

The honesty the characters show in their entries allows for a full portrait of the teens, including their more complex, less idealistic traits. Hearing the differing accounts of their romantic interactions – including the details they focus on – lends a sense of intimacy to the book, showcasing Ali’s comfort with the epistolary form.

Teens and adults of any cultural background will relate to the book’s themes of family, loss, friendship, uncertain futures, and first loves. But Love from A to Z also offers the rare opportunity to read about the viewpoints of Muslim teens in the words of Muslim teen characters. In this way, Ali creates universality through specificity.