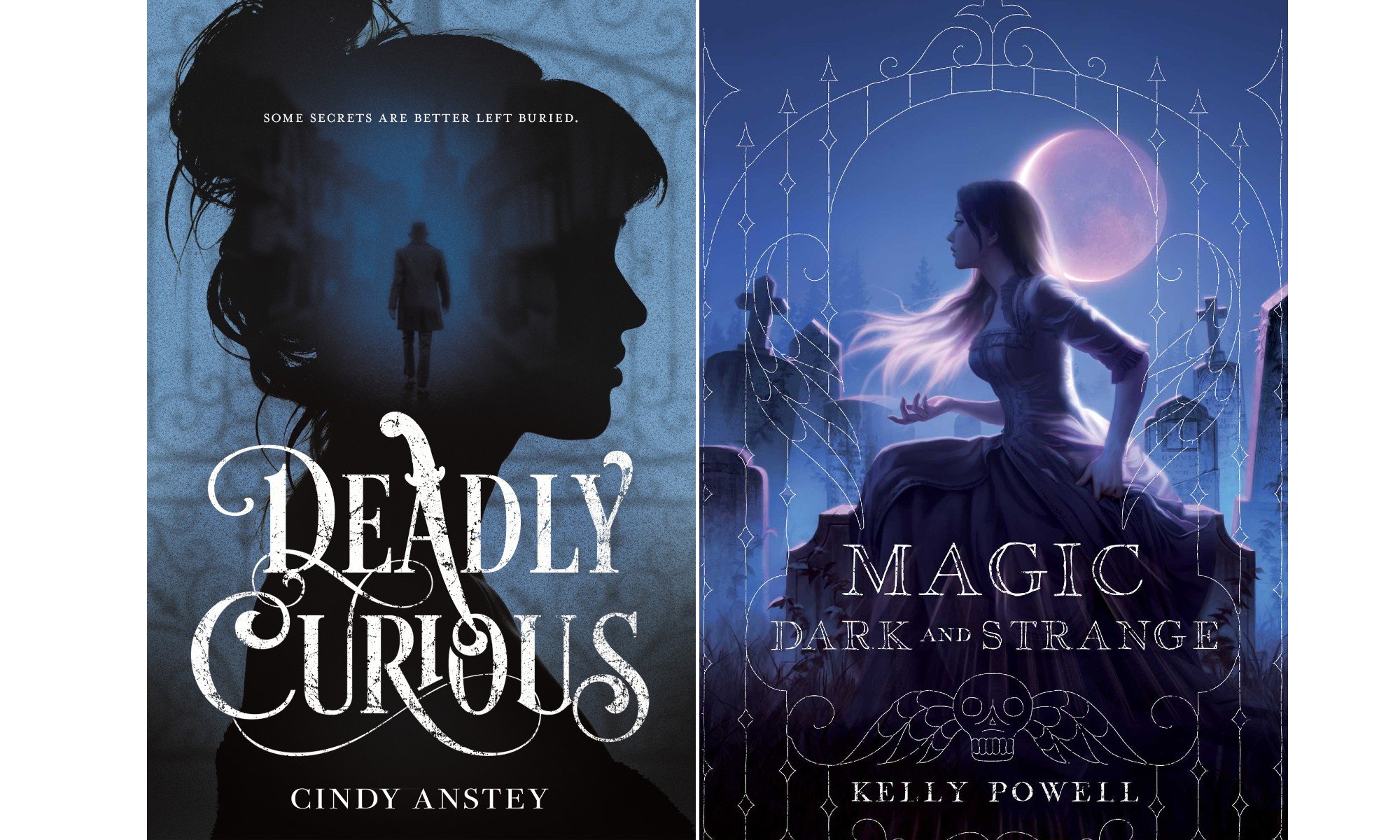 There’s something about the Victorian era that lures the mystery writer. Perhaps it’s the shadowy gaslit streets or the sweeping, barren countryside. Maybe it’s the age’s lurid fascination with death and spiritualism, the heavy division between gilded upper crust and poor common folk, or the impressive leaps in science and technology. Whatever it is, the period makes a perfect setting for a detective novel.

Authors Kelly Powell and Cindy Anstey must agree, having chosen to locate their new novels in the 19th century.

In Powell’s Magic Dark and Strange, 17-year-old Catherine Daly works by day for the Invercarn Chronicle, while digging up and reanimating corpses by night. The project is noble, though it comes with a grim side effect: by giving the dead one hour of life so loved ones can say a proper goodbye, Catherine loses one hour of her own life. One night, her employer tasks her with digging up a grave to find a timepiece rumoured to awaken the dead in a more permanent manner. Concerned and curious, Catherine asks the local watchmaker’s son, Guy Nolan, to help. But the grave contains no timepiece, only the very old remains of a teenage boy who returns to life before their eyes. As suspicion of theft and conspiracy flourishes around them, Catherine and Guy must figure out how the boy, the timepiece, and a series of ill-fated events connect – before death takes them all.

Magic Dark and Strange is a delight. The story brims with smart and charming characters, unexpected twists, and an inviting romance. Catherine is a strong female in a male-dominated world, and while she plays by the rules of the time (for instance calling Guy “Mr. Nolan” until they consider each other friends), she doesn’t let them define her. She is, after all, digging up bodies in the middle of the night. Her character is complemented by Guy, who also does things by the book but isn’t afraid to show his emotions or defer to Catherine. Powell has a strong grip on the story, delivering just the right amount of chaos and spirited playfulness to keep readers guessing until the very end.

Deadly Curious is a more elaborate story, featuring a larger cast of characters and plot twists, but author Anstey fails to captivate. Eighteen-year-old Sophia Thompson receives a letter from her cousin Daphne, who insists she come to investigate the murder of Daphne’s brother, Andrew. Sophia, determined to become the first female Bow Street Runner (the predecessors of the officers of Scotland Yard), arrives at the same time as hired runner Jeremy Fraser. The two conspire to work together on the case, while attempting to deny and temper their attraction to each other.

Unfortunately, readers will figure out who is at the centre of Andrew’s murder and the successive mayhem long before Jeremy and Sophia. Both characters come across as playing detective, which may make sense for Sophia but not for Jeremy, whose very profession involves investigation. Their wealthy standing is heavily described, with much attention paid to the estate upon which Andrew is murdered and the numerous social engagements the pair attend, leaving the reader to wonder whether Deadly Curious is supposed to be a romance novel with a murder, or a murder mystery with a romantic element.

Either way, the relationship does not build or advance until the final chapters, much like the investigation, which is not solved by instinct, deductive reasoning, or deep reflection – key traits of the great fictional detectives – but rather by convenient accident. With its ideal setting, peculiar murder, and determined female protagonist, Deadly Curious could have been a Victorian mystery for the 21st century. Instead, it fails to move beyond the prim and predictable.