★Mansions of the Moon 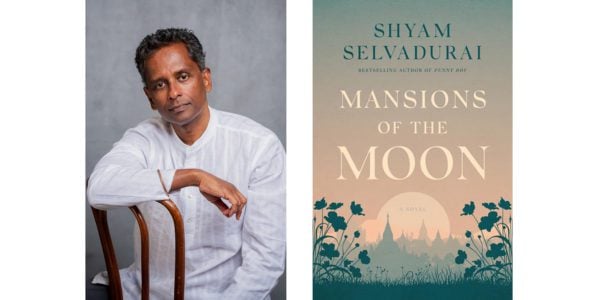 After nearly a decade, bestselling author of Funny Boy and The Hungry Ghosts Shyam Selvadurai returns with a sweeping new novel set in ancient India. It introduces readers to Siddhartha Gotama – the man who would become Buddha – and Yasodhara, the woman who married him.

One fateful night, at the request of Maharaja Maha Kosala, a young Siddhartha meets with an ascetic who preaches of a suffering that “ends all further suffering.” Even though he is repulsed by the ascetic’s fanaticism, Siddhartha finds himself drawn to the man’s underlying philosophy. In order to escape what he considers a fresh defect within himself, Siddhartha decides a wife of practicality will rein him in, and he asks for his cousin’s hand in marriage.

Sixteen-year-old Yasodhara, unaware of her cousin’s attraction to this new spiritual philosophy, agrees to marry Siddhartha. She quickly spots his tendency to brood, but chalks it up to his temperament. Soon after their wedding, Siddhartha is stationed as the governor in Mudgala in the north, and Yasodhara is uprooted from the sheltered life she’s lived as a well-born female. Bearing the lot of women, Yasodhara is forced to reinvent herself – and she does. She becomes an expert in cultivating the paddy fields and takes satisfaction in the “feel of the earth in her hands, the sense of power in growing the food they ate.” And she thrives. Despite Siddhartha’s success, his thoughts return to the impermanence of life, a fixation renewed by an unexpected visit from an old friend.

Things are no better back in the royal city of Kapilavastu, and soon Yasodhara is unable to bridge the chasm between her and her husband, despite her desperate attempts. In a heartbreaking sequence, she confronts Siddhartha about the robe, razor, and begging bowl she finds in his private quarters. He finally tells her the truth, beginning with that night so many years ago, and admits this search for spiritual enlightenment is a calling he can no longer leave unanswered. After presiding over the naming ceremony of his son, Rahula, Siddhartha disappears from Yasodhara’s life without saying a word.

Divided into three parts called dukkha, a term that covers everything from dissatisfaction to irritation and tragedy, Mansions of the Moon is a deeply intimate novel. The dukkhas, each of which begins with a vignette of Yasodhara in the narrative present and recalls the hardships she endured after Siddhartha’s abandonment, trace their marriage as life takes them across India, from the mountains of Mudgala to the grandeur of Kapilavastu and the soil of Licchavi in the Kathmandu Valley.

Selvadurai has created a captivating look at Yasodhara, who has remained largely hidden in Buddhist literature. Although she is “submerged by change, swept away and drowned in it” due to the decisions the men in her life make, here, in these pages, we see her struggle, hear her fears, and understand her pain. We know what’s coming next and want to shelter her from the blow – a testament to Selvadurai’s extraordinary empathy and storytelling. Narrated using many Pali words, this is an epic story of Yasodhara’s journey to find her own path forward.