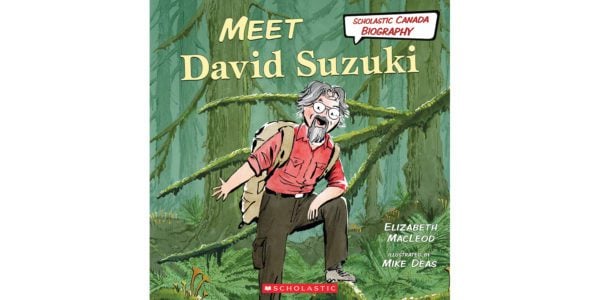 The newest picture book in the Scholastic Canada Biography series written by Elizabeth MacLeod and illustrated by Mike Deas offers an engaging look at environmentalist David Suzuki’s life thus far. The narrative, which begins and ends in Vancouver, depicts Suzuki’s early childhood from fishing trips to his family’s internment, which is followed by a forced move to Leamington, Ontario. MacLeod and Deas also provide an overview of Suzuki’s campaign for student body president, his work as a geneticist as well as a radio and TV host, and finally his participation at a climate-change rally.

Though the narrative feels sweeping at times, MacLeod expertly integrates important themes by highlighting Suzuki’s motivations: a deep respect for nature inspired by his father, the passion for civil rights driven by his experiences as a Japanese Canadian, and a love of public speaking, genetics, and environmentalism that shaped his career and activism.

MacLeod’s narrative is enriched by Deas’s illustrations, which infuse the reading experience with relatability. For example, when the Suzuki family is forced to leave Vancouver during the Second World War, MacLeod explains how the Canadian government drove 22,000 Japanese Canadians from their homes, sent them to internment camps, and seized and sold their belongings. While the text is clear and factual, the illustrations help readers better understand the emotional impact. One spread shows families boarding trains and truck beds while a white man shouts, “Send them back to Japan!” Nearby, a small child asks their parent, “What did we do wrong? I was born here. We’ve never even been to Japan.”

Lighter, humorous scenes break up the book’s serious content. In a section about The Nature of Things, a science-based television series, Deas shows Suzuki shivering in waist-deep water, saying, “This segment about extreme cold is so cool it’s f-f-freezing!” Overall, Meet David Suzuki is a strong introduction to the work of a long-respected Canadian environmentalist that will appeal to young students.