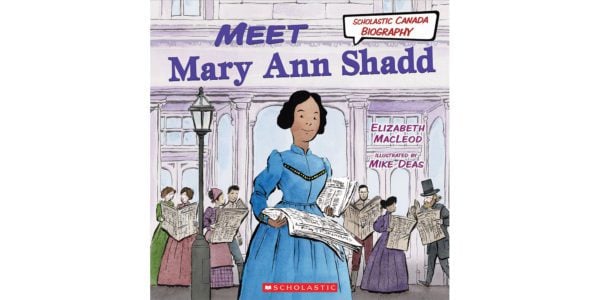 Through ingenuity and persistence, Mary Ann Shadd worked to change people’s lives for the better. She learned the importance of supporting the Black community while still a child: her parents were anti-slavery activists who used their home as a station for the Underground Railroad. Their willingness to uplift, educate, and support their community in both the United States and Canada would be a source of lifelong inspiration to Shadd.

She accomplished many firsts: Shadd was the first female publisher in Canada, the first Black woman to publish a newspaper in North America, and, at the age of 60, one of the first Black women to graduate from law school and go into practice. Shadd also ran a printing business, gave speeches as a suffragette, and helped to enlist Black men to fight for the North in the Civil War – the battle that ultimately brought about the end of slavery in the United States. Though Shadd achieved much, she still struggled to be taken seriously. At one point, her life was threatened.

Meet Mary Ann Shadd, the ninth Scholastic Canada Biography written by Elizabeth MacLeod, is informative and engaging. MacLeod weaves the turbulent events of Shadd’s life into a rousing story that kids aren’t likely to forget; Shadd fought racism and sexism, and was even chased out of Canada because of her work as a suffragette. Mike Deas’s illustrations are bright and arresting, with a comic-book style that makes the biography accessible to a wide range of ages, regardless of reading level. The final pages offer a timeline of events and feature the only surviving photograph of the real Shadd, providing valuable information that will enable interested readers to learn even more about her life.

Mary Ann Shadd is an important historical figure on both sides of the border. Her story will be inspirational to kids with a wide range of interests, including law, education, activism, and publishing.