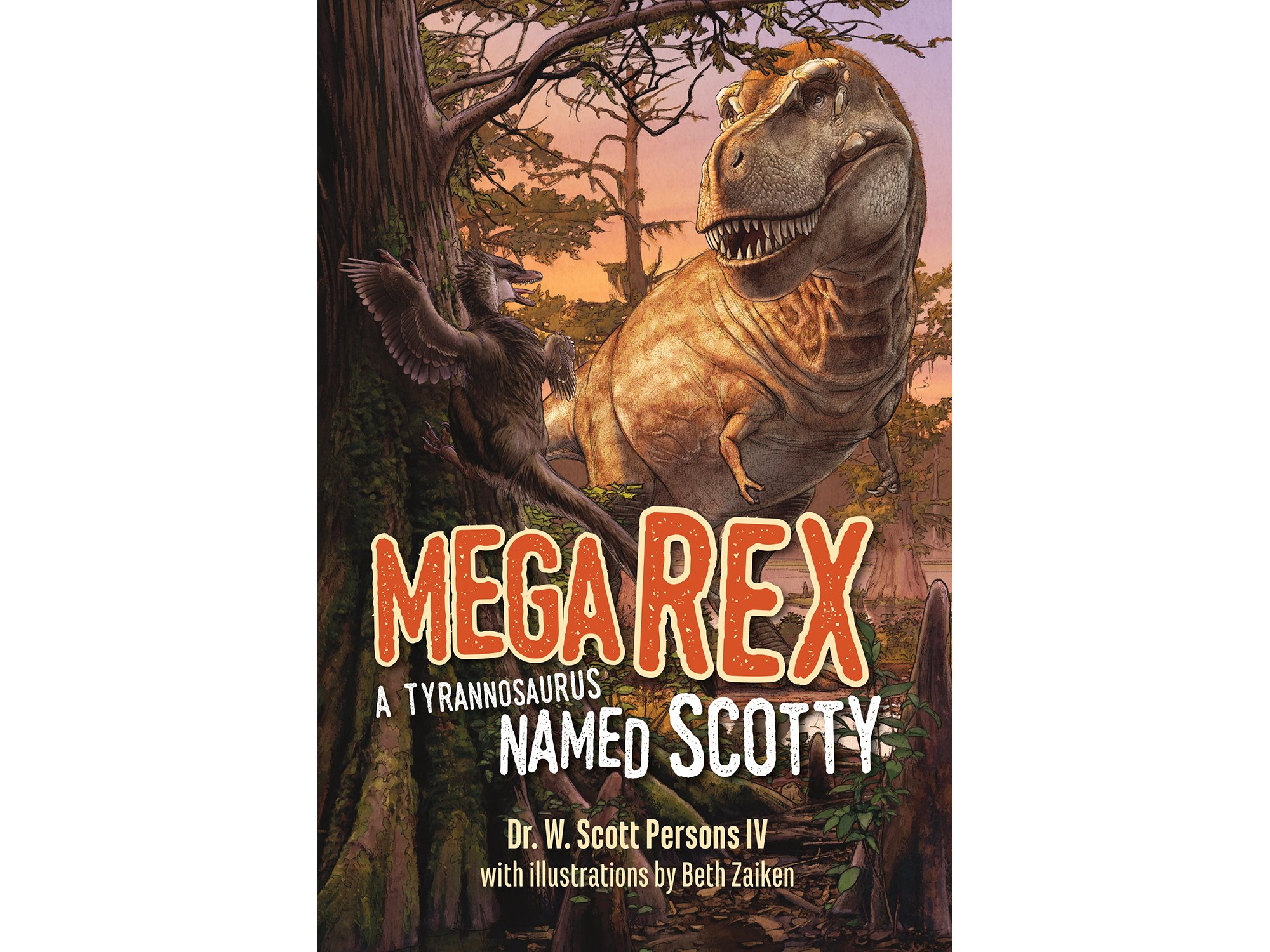 In the crowded field of dinosaur non-fiction books, Mega Rex stands out. This guide is expertly written by Scott Persons, the paleontologist who led the first research study of the largest and oldest Tyrannosaurus rex known to the scientific world.

An inventive introduction allows readers to imagine they’re an Acheroraptor (“a kind of feathered dinosaur”) 66 million years ago: “The T. rex is big, nearly three times as long as you and ten times as heavy. It lunges forward, and you run as fast as you can. The T. rex snaps at your tail and yanks out three of your tail feathers. Those feathers will grow back, but that was too close!” After this immersive high drama, chapters packed with easy-to-understand, erudite discussions dig deep into the Cretaceous period and offer the latest insight into how dinosaurs lived, hunted, fought, and survived.

With a conversational tone brimming with inquisitiveness and excitement, Persons details the 1991 discovery of Scotty (nicknamed for the glasses of Scotch whiskey raised to celebrate the find) in Saskatchewan’s fossil-rich badlands, and the laborious and challenging decades-long process of excavation and reconstruction. Adding to the interactive field-trip nature of the book are photographs of Tyrannosaurus teeth poking out of the dig site and close-ups of gigantic pieces of fossilized dino poop.

Profiles of “Team Rex” members offer a glimpse into the specialized work of the many professionals involved in bringing Scotty back to life, including Wes Long, a fossil excavator and preparator; Jon Runolfson, a model maker who created tiny copies of the skeleton; and Ariana Paulina-Carabajal, a paleontologist who studies the brains of dinosaurs.

The rigour and authority found in the text is also on display in paleoartist Beth Zaiken’s scientifically accurate illustrations. Against a hazy forest backdrop, scenes of prehistoric life and death play out, from newly hatched, wobbly T. rexes, who sport coats of fuzzy feathers, to a dinosaur corpse decomposing at a river bed, with giant rib bones exposed to scavengers.

Persons nimbly pieces together the stories of the past and shares his current, insider knowledge on what it would feel like to pet an adult Tyrannosaurus (“rough and scaly, but still warm”), and whether Scotty was the biggest that ever lived (“Almost certainly not”).  Many unanswered puzzles remain, like Scotty’s sex and cause of death, and Persons offers his personal hope for the future: “I’d like it if some of these mysteries wound up being solved by someone who has read this book.”