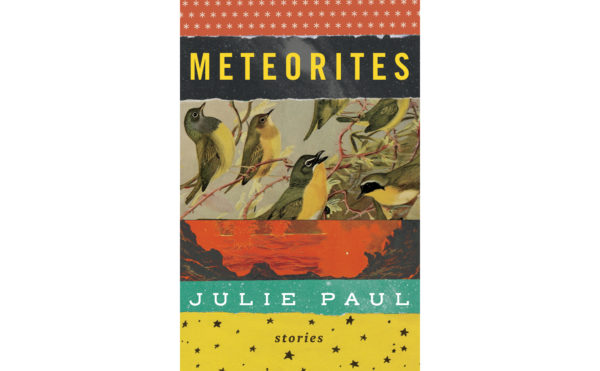 Absences recur throughout the 14 stories in Victoria author Julie Paul’s third collection. From the opening piece, about a man on vacation in Hawaii being haunted by the ghost of his dead father, to the estranged identical twins in “Spilling the Bees” and the daughter in “Barkers’ Berries,” who flees the family farm in rural Ontario – and her mother’s terminal illness – for life as a folk singer on Vancouver Island, people in these stories are constantly vanishing or abandoning those closest to them.

If there is an abiding irony across the various entries in Meteorites, it is the way in which things missing nevertheless exert a palpable presence in the lives of the characters. The anxiety-disorder sufferer who narrates “Clutter” fixates on the map of the world left behind when her partner walked out on her. The protagonist of “Millie’s Calling,” a church organist who lost her arm in an accident with a manure spreader, feels the phantom limb like a physical presence; as the story unfolds the stump of her amputated arm begins bleeding mysteriously.

Paul unspools her narratives with a generally light touch, focusing on situations and circumstances that insert themselves intrusively in the middle of close family relationships or friendships. In “Manifest,” the protagonist must contend with the unwanted appearance of her husband’s 18-year-old daughter by another marriage and the destabilizing effect this wayward young woman has on the household. The two adolescents in “Trajectory” find their deep commitment to one another fractured during a school trip to Boston and Salem when one of the two begins to explore her burgeoning sexuality and newfound interest in boys. The trajectory of the friends’ relationship is downward; the final image has the narrator looking out the window of a restaurant back at the highway median where she has abandoned her classmate; the other girl is obscured from view.

Though Meteorites is not a linked collection, the thematic threads that run through the various entries lend the book a sense of cohesion. Patterns of metaphor – nighttime, water, animals (including various birds) – crop up again and again in successive stories, further strengthening the connective tissue binding the collection together.

The book is so carefully calibrated, in fact, that the few stories that appear as outliers call undue attention to themselves. The ghost in the opener feels out of place, as does the excessive violence of “Hangman” (even granted that the mayhem takes place off stage). “The Expansion” is a dystopian satire about climate change and manifest destiny; this story is tonally inconsistent with the surrounding material, which cleaves to a more naturalistic presentation.

This is true even for a story like “In the Next Breath,” in which a group of college students celebrate the end of exams by taking a homeless man to the lakeshore with the intent of dunking him in the frigid water to jar him out of his life of torpor. The metaphorical baptism is echoed in the following story, “Little Stars,” when Anna, a couple’s troubled daughter who has been cutting herself, allows her mother to entice her into the lake for a swim: “When she surfaced, she was both a new person and my long-hidden daughter.”

Immersion in water also features in the climax to the title story, which, at close to 40 pages, is easily the longest piece in the collection. A couple of long-time residents in the town of Stevens Falls attempt to get revenge on a pair of newcomers once they discover the reason for the latter’s appearance in the town; they endeavour to convince the interlopers to take an icy dip in the water of the local quarry as a kind of initiation into the community. “Maybe they’d wave their hands in the sign of the cross above the water, for effect,” the locals think, further extending the imagery of baptismal renewal. It is the careful attention to such intertextual linkages that elevates Meteorites from a group of disparate, individual pieces to an intriguing, unified whole.