★Midday at the Super-Kamiokande 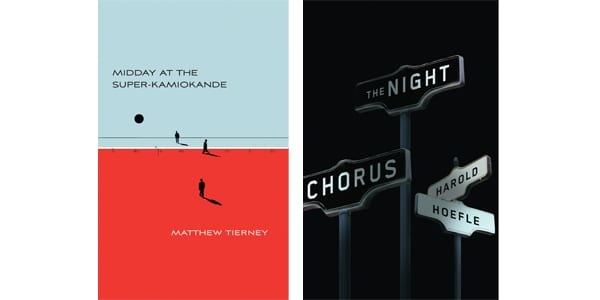 A poet should be a high-powered observer, a master of microscopic attention, and an instrument by which one world can be translated into another, rather like a Hubble telescope for metaphoric transmission. In his fourth collection, Matthew Tierney proves himself a poet of this calibre and competency.

Through its powerful contemplation of existence, Midday at the Super-Kamiokande poses difficult questions while avoiding potted answers. Tierney nods to many major philosophers while considering cosmology and the paradox of existence, all, remarkably, with strict attentiveness to sound, structure, and irony within the unit of the line. His considerations range through psychoanalysis, ontology, infinity, meaning, emptiness, distortion, logic, and cause, while simultaneously providing punchlines such as, “In the quad the dorky couple / poses for engagement photos for a photog / who’s like a headache performing a handjob.” Or, “Metaphysics is so hokey. The plot twists! / You put your whole self in. / You turn it all about.”

Tierney’s strength comes from the use of specific images to represent metaphysical and ontological wrestling:

A life of true belief
needs no justification.
Stand behind any window in
my many-roomed dream house
and your gaze falls on flat earth.

maybe three, I see no alternative.
Pure reason has let me alone
to click beads like antinomies.

Each word carefully represents two things at once; the cardinal carries an associative meaning a robin would not. This attentiveness creates the delight of discovery. Tierney shows us his capacity for being both an intellectual and the court jester in the same breath.

Moments of laugh-out-loud irony occur frequently, often coupled with a Malapropian style of sound dystopia, which Tierney exploits as a way of investigating paradox. The result is darkly satiric and best exemplified in
“Signal to Noise”:

Pig snouts, pig ears
poke through the panels of the transport,
a spectre panning past us.
Oh the squealing,
as if arranged by Phil Spector.

(You will remember. You will.)

Tierney morphs language and line into a method of rhetorical query illustrating that irony resides everywhere, in all things, and humans can never be satisfied with their repetitive, cyclical existence. Although this sounds remarkably depressing, artistic attention elevates these seemingly dark musings. Midday at the Super-Kamiokande is a refreshing and exuberant delight throughout.

Harold Hoefle’s The Night Chorus trains its eye on details of landscape, portraits of strangers, and even the mass shooting at the Bataclan theatre in Paris. “Worlds” represents Hoefle’s work at its best, bringing raw specifics of observation to the fore, and detailing those in surprising ways. The long, prosaic sentence that closes the poem pans out to show what is beyond the frame.

More of these ordinary/extraordinary moments can be found in The Night Chorus, making it a solid if unremarkable read. More could have been done to scour for weak clichés that too often interrupt the standout moments, like those found in the strongest poems: “Amsterdam,” “Night Ghazals,” “Underfoot,” “Crimson Ribbon,” and “Bridges.”

“The Diver” stands out for its ability to become intimate with the scene. Here Hoefle manages deft narrative leaps to create a complex character portrait in few words and images and, in the end, balances the despair of the poem’s first half with a sublime tone:

While I watched the spider float,
I asked you about your mint garden,
how you press your face
into the leaves to de-stress.

You stuck out the paddle
and gave the spider a raft.
You were like that.

Hoefle’s wide-eyed exploration of the world around him speaks of the wonder and tumult of living in this place and time. There are moments of insightful transcendence in The Night Chorus. Like Tierney’s collection, Hoefle’s speaks of paradox but in a much different style and voice.