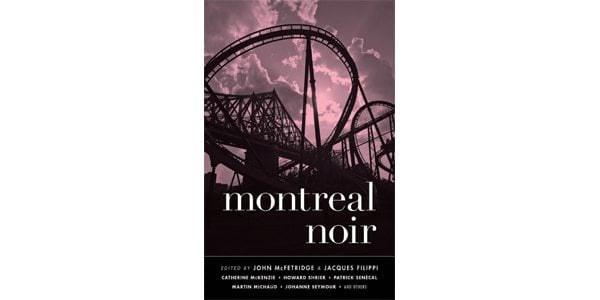 There is a particular sensibility associated with the noir genre in both film and literature. Steeped in shadow and gloom, with origins in German expressionism, the noir temperament is saturated in booze, sex, and sin. It locates itself in dank corners of dive bars, down neglected back alleys, in flophouses and cut-rate motel rooms, and on the wrong side of the tracks. And notwithstanding a subgenre of so-called “rural noir” (think Donald Ray Pollock and Kevin Hardcastle), it is almost defiantly urban.

In Canada, the centre of the noir universe is Montreal. Situated within spitting distance of the U.S. border, the city was a prime base for bootleggers and rum runners during the Prohibition era (not to mention whiskey-starved Americans crossing the border in search of the city’s storied nightlife); as an industrial hub during and after the Second World War, it offered a milieu for working-class labourers to rub elbows with financiers and cultural leaders; and it has always boasted a refreshingly laissez-faire relationship with sex, drugs, and gambling. As the francophone centre of anglophone Canada, and the anglophone centre of francophone Quebec, Montreal is, in one sense at least, a city of outsiders. As John McFetridge and Jacques Filippi write, “It’s unsettling, it’s subversive, it’s palpable, but it’s never obvious.” Or, more succinctly: “Noir is Montreal.”

McFetridge and Filippi are on hand as editors of Montreal Noir, the latest in Akashic Books’ series of international city-based noir anthologies. To prove their point, McFetridge and Filippi have collected stories from 15 authors – both in English and translated from the French – that together comprise a compendium of approaches to the genre as suggested by various neighbourhoods in and around Quebec’s most populous city. Present and accounted for are gangsters and low-lifes, sad sacks and fuck-ups, cops and criminals and con artists, all united by their urge – out of desire or necessity – to operate beyond the confines of
respectability or polite society.

The collection opens with a bang – literally. Patrick Senécal’s high-concept story, “Rush Hour” (translated by Katie Shireen Assef), focuses on Hughes, a Montreal traffic reporter who spends his days driving around the city reporting on congestion and advising listeners on more efficient alternate routes. Hughes once made a snide on-air crack about Philippe Létourneau, an air-traffic controller whose disastrous miscalculation resulted in a catastrophic crash on an airport runway. During an afternoon rush-hour broadcast, the disgraced Létourneau contacts Hughes and forces him to try to figure out the location of a bomb planted somewhere in the downtown core.

Sénecal – who is widely known as Quebec’s Stephen King – crafts his story more in the manner of a white-knuckle Hollywood thriller than a traditional noir tale, but he does provide a breathless entrée into the anthology (even if the final, nihilistic twist is telegraphed a bit too far in advance). Other entries, such as Peter Kirby’s “The Crap Magnet” or Robert Pobi’s “Poppa,” traverse territory more similar to the work of classic Montreal pulp fiction by writers such as David Montrose and Al Palmer.

Montrose and Palmer – along with Douglas Sanderson and a pseudonymous Brian Moore – were members of a cohort of writers responsible for a small cottage industry of noir fiction set in Montreal during the 1950s (see feature, p. 21). If the new generation of writers differs in any respect from their golden-age predecessors, it is in the freedom to be even more explicit in the areas of sex and – especially – violence. The stories in Montreal Noir are frequently graphic and push their material to the limits of what some readers might consider good taste, most especially in stories by Geneviève Lefebvre and Howard Shrier dealing with themes of pedophilia and child murder.

Then again, readers who are uncomfortable being taken to some fairly grim places should probaby avoid an anthology of noir fiction altogether: as its very name implies, this is a literary mode that traffics in the darkest reaches of human nature, and though there may be righteousness in the end, it inevitably is the result of retributive violence; amorality is one of the genre’s cardinal attributes. In this sense, the outlier in Montreal Noir is Catherine McKenzie’s story, “Joke’s on You,” which cleaves closer to the mode of domestic suspense and frequently threatens to tip over into sentimentality. After an ill-advised encounter with an old flame, McKenzie’s protagonist thinks, “I was so tired of the dark” – a sentence that should never come anywhere near the vicinity of a noir tale.

One of the most effective stories in this anthology – and certainly one of the weirdest – is Arjun Basu’s “Wild Horses,” a vaguely surreal tale about a Mile End man who wakes up in the middle of the night to the sound of horses galloping past on the street outside. When he questions his neighbours about this, they deny any knowledge; it is only after an encounter with the wife of a local judge – a client at the high-end shoe store where he is a manager – that the provenance of the horses becomes (somewhat) clear. Basu’s story, complete with its satire of class warfare and the excesses of the wealthy (and a shit-covered Oxford secreted in a kitchen freezer), is blazingly original, and provides proof that the genre is still fertile ground for the kind of vivid imagery and skewed perspectives that have always given it life.