by Zetta Elliott and Lyn Miller-Lachmann 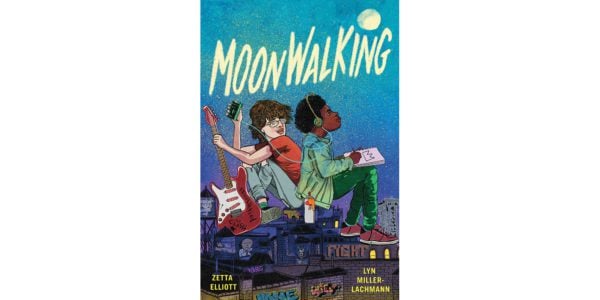 Set in Brooklyn at the height of the Reagan era, Moonwalking follows two boys, JJ and Pie, as they navigate a world entrenched in the political and racial mire of a deeply divided America. Pie is a visionary Black and Latino boy; he’s academically gifted and always has spray paint in tow to light Brooklyn’s walls on fire with graffiti, just like his hero Jean-Michel Basquiat. But like the concrete walls, his life too is hardened with layers – of a mom living with untreated mental illness, and of injustice at the hands of every person that sees skin colour as a predictor of worth.

JJ is new to Brooklyn, and readies himself for the inevitable loneliness that comes with being especially quiet and, now, one of the only white kids at his school. JJ has seen things: he has seen his dad pelted with eggs at the air traffic controllers’ union protests; he has seen his sister hide who she loves. He sees lyrics and music in the world, and now he sees his classmate Pie.

A friendship slowly forms between JJ and Pie, albeit a rickety one. Pie instills in JJ a sense of confidence about his musical passion, and JJ is witness to Pie’s blooming talent torn apart by turmoil; then, it all threatens to come undone after the two boys witness how injustice marks them differently. One night, the police target Pie while he’s out with JJ making graffiti. JJ walks away uncuffed, having not spoken up for his friend, and Pie is yet again the target of anti-Black racism. The experience leaves Pie with a deep wound and JJ with the realization that silence is not only a character trait but also a weapon. This will not be a friendship that lasts a lifetime, but one that leaves an indelible mark on both boys.

The dual narrative, by award-winning author and poet Zetta Elliott and Lyn Miller-Lachmann, creates a unique staccato structure – each transition resets the mood. Moonwalking is a book that will demand keen attention from its readers. Its references to ’80s culture and political strife are acute and call on us to situate ourselves in a world both foreign and familiar. While JJ and Pie’s childhoods unfold 40 years in the past, their experience will ring true to modern readers, with explorations of immigration, racism, mental illness, and love – all topics that still resonate powerfully today. Racism is as real, divisions are as stark, no matter how freshly walked the protests or raw the throats that call for justice.