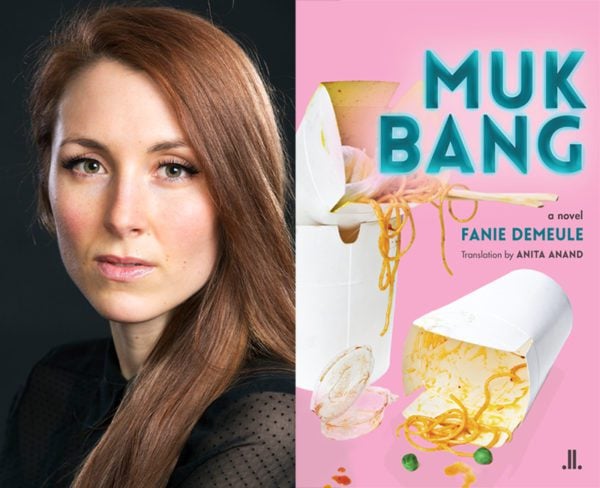 One statement from a mother to her child – “You scare me” – changes everything.

In Mukbang, Fanie Demeule’s sixth book, the author explores the insatiable hunger of those who were raised on the hollow intimacy of the internet. From a young age, Kim is convinced her parents do not love her, and her only solace lies in interaction with technology. The novel follows the protagonist’s coming of age, which is marked by cavernous feelings of isolation and the joy she gets from being on her computer. She learns to fill her days by playing God in The Sims video game, watching hours of music videos on early YouTube, and ignoring texts from her cousin asking her to hang out.

Demeule has captured the essence of early-21st-century ennui and what it’s like to grow up with unsupervised access to the internet with eerie precision. The writing is journalistic, and the use of line breaks, short paragraphs, YouTube comments, and snippets of wikiHow articles recreate the experience of reading online. References and terms from the pop culture and internet culture of the mid-aughts abound. The text is heavily interspersed with QR codes, which create a distracting reading experience in general, though at times they can be helpful for context.

As she gets older, Kim’s relationship with the Internet changes; she realizes she can monetize her online presence and manage her restrictive “clean eating” habits by starting a spiritual YouTube channel, which eventually turns into her own mukbang channel. Mukbang, which translates to “eating broadcast” or “eating show,” is an internet phenomenon wherein people eat food, often in large quantities, as they interact with their audience. It originated and continues to be very popular in South Korea, but has become a global fad. Some people watch mukbangs to curb social isolation, others for the ASMR (autonomous sensory meridian response) tingles, and others for dehumanizing sexual purposes.

Misha, a Korean restaurant owner and fellow Montreal-based mukbang creator, says that “watching mukbang videos serves as a palliative for what is missing, filling the void with an even greater kind of emptiness, that of the sham” – which fittingly summarizes the ethos of the novel.

Like many people socialized as women, Kim is highly critical of her body and has a relationship with food that veers into the extremes of both restrictive eating and bingeing. At one point, Kim proclaims that she has an “Instagrammable thigh gap” and hauntingly states, “I no longer experience hunger, fatigue, nor loneliness.” For a brief time, she finds satisfaction in being able to believe she has control over her body and others’ perception of her, but that is, of course, fleeting.

Kim is intrigued by mukbangs because they appease her own physical hunger, and she eventually reaches out to Misha for tips and possibly a collaboration, but she is gently rejected. This leads her to create a competition between them – and it ends horrifically.

Kim’s parents, Misha, and Kim’s golden-child cousin Jen are all implicated in the wreckage, and their individual horror stories are inextricably intertwined. This interconnectedness is one of the most powerful aspects of Mukbang, a novel that excels at exploring how the internet is an ephemeral, absurdist graveyard from which nothing can ever be fully erased or removed.