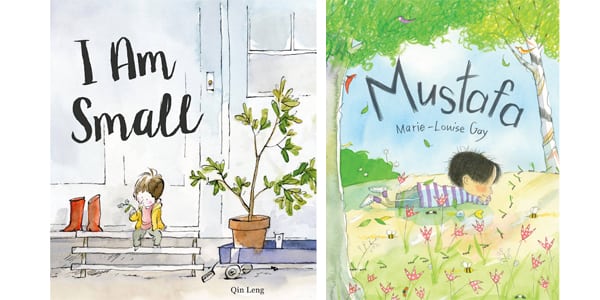 When a child is yearning for a different reality, how do they make a change? How much is in their power and how much must they rely on others? Mimi in Qin Leng’s I Am Small and Mustafa, the titular character in Marie-Louise Gay’s latest picture book, both feel ignored. Their respective dilemmas are initially resolved, but the path to their new-found visibility is mostly paved by others.

Mimi is unhappy about her size and says so on the first page: “I might as well be called Mini. It’s true!” She goes on to list the various inconveniences of being smaller than her peers, even as others point out some of the advantages. Mimi eventually considers a different perspective, but the tipping point comes in the form of a new baby sibling and Mimi’s mother saying, “You started out like this, too, you know. Very small! And look at you now – a big sister.”

It’s a quick fix and one that doesn’t seem to really address Mimi’s issue, which is being small in comparison to other kids her age. Seeing a baby naturally develop might comfort a younger child who is impatient to get older and bigger, but it isn’t clear how it helps a child who doesn’t currently measure up to her classmates. What if patience is moot and Mimi will always be smaller than others?

The book is laudably gender neutral, though, as Leng doesn’t embed needless or dichotomous boy/girl information in her words or pictures. Mimi wears a hoodie and pants, has short hair, and engages in activities ranging from playing knights to writing about ants. There are only two direct references to Mimi’s gender in the first-person text.

Mustafa tells the story of a young child dealing with a new and unfamiliar place. The story opens with images of a small group of people carrying bundles and baskets on and off a boat. No specific place names are given, though Mustafa’s mother is pictured wearing a hijab and readers are told that “Mustafa and his family travelled a very, very long way to get to their new country.” There are hints of past trauma, but the language is general and gentle enough for kindergarteners.

Soon Mustafa makes a connection with someone outside his family; he meets a Caucasian girl named Maria in the park. She initiates contact, introduces herself, and shows him around. Readers will recognize her from an earlier scene, in which she drew over Mustafa’s sidewalk pictures of “smoke and fire” with “flowers, butterflies and stars” that made “the clouds of smoke and fire disappear.” Some may interpret Maria’s actions as representative of the positive transformation to come for Mustafa, but they can also be viewed as an erasure of his past experience.

In an industry that is finally starting to recognize its exclusion of marginalized voices (the U.S.’s Cooperative Children’s Book Center reports that only seven per cent of books published in 2017 were by people of colour), it would be remiss to ignore the absence of an acknowledgement or author’s note detailing Gay’s experience with, connection to, or research on the refugee or immigrant experience. Without this information, it’s unclear how much she is writing or illustrating outside of her lived experience – a vital consideration for many when deciding to share this book with young people.

These titles showcase Leng’s and Gay’s signature visual styles, which are grounded in watercolour, pen, and ink. Leng makes use of white space and tableaux, often fitting multiple scenes into a spread. Her watercolours are somewhat diluted, but they’re still cheerful and calm, even as they reflect Mimi’s crowded and bustling urban environment. Mustafa is instantly recognizable as a Gay book with its frenetic, playfully tremulous lines and round-faced characters with ear-to-ear smiles between rosy cheeks. Most of the story takes place in the city park and the depiction of blazing orange autumn trees is delightfully reminiscent of Gay’s best-known character, Stella.

Mimi and Mustafa both get happy endings that communicate to the reader the importance of acceptance and kindness. But their stories are about things that happen to them, rather than experiences they have with others. It’s unreasonable to expect any child to single-handedly change their circumstances, but they should maintain some agency and power in the process