My Conversations with Canadians 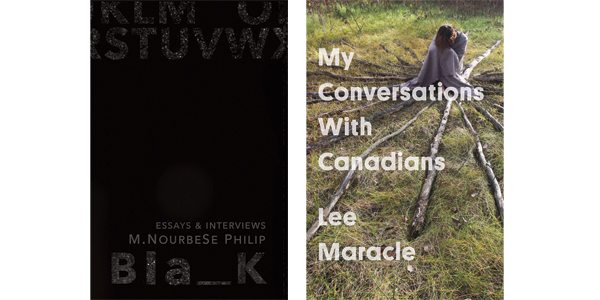 To read Lee Maracle’s My Conversations with Canadians and M. NourbeSe Philip’s Blank back-to-back is to confront the very real possibility that Martin Luther King Jr.’s belief in a moral universe whose long arc bends toward justice is at best wishful thinking and at worst misleading. Barack Obama loved King’s saying so much, he did the next best thing to chiselling it on a tablet: he had it woven into an Oval Office rug. Maracle and Philip, by contrast, offer essays that puncture the myth of progress through time and suggest that the more things change, the more they stay rotten. Maracle comes at this notion from an Indigenous world view, while Philip privileges blackness as a gateway to seeing and testing this country’s race relations.

Canada comes out of this mix bruised and tattered, and for good reasons. But what Maracle and Philip offer in their smart, humane, and confrontational books is the reckoning this country needs if we want the needle moved on racism in politics, culture, and our communities. Both books should be required reading for Canadians on the left and right, especially younger readers who could benefit from the authors’ long creative arcs, which span the past four decades.

Maracle frames her essays as conversations, but they are actually monologues to which the reader is not invited to respond. After decades of fielding infuriating questions from Canadians on book tours and at public lectures, Maracle sets the record straight on a few of our beloved myths, including Canada’s current narrative as a model multicultural society. “Canada is a British-dominated nation that diminishes all other cultures and promotes its own,” she asserts – assertion being her default rhetorical strategy. Well-meaning white Canadians (and to some degree people of colour who came after them) must stop acting all innocent and unaware of their roles in dispossessing Indigenous peoples of their lands and, crucially, their stories.

In a powerful conversation simply titled “Appropriation,” Maracle delivers a rebuke to past writers and a warning shot to new ones who think that getting an elder’s permission to write down oral stories gives them a moral absolution from literary theft. Maracle believes that cultural transmission is the birthright of children: “No one but our children are entitled to our knowledge, stories, law, teachings, science, or medicine.” Many white writers, scientists, and politicians have benefitted financially from appropriation while Indigenous people struggle to reclaim their knowledge or use it to level the playing field.

Elsewhere, Maracle boldly confronts white feminism, literary Canada’s predilection for panels and tokenism, and the residential schools’ legacy, which she convincingly compares to genocide. This much eclecticism gives the collection a survey-like feel, and the inclusion of a speech delivered in India as part of a conference on First Nations literature as the book’s finale suggests a desire to pad instead of revisiting and expanding original content.

Philip’s book, by contrast, is built around juxtaposing older, out-of-print material – mainly from her 1992 collection Frontiers – with codas, new essays, letters, and ruminations. Not everything in this 350-page book is a must-read, and some entries fall somewhere between self-­indulgence and self-pity. Yet cumulatively, the essays show not just how prescient Philip is as a commentator, but how much our culture has lost by the marginalization and erasure of voices like hers (hence the book’s title).

Read her analysis of the racist and hypocritical assumptions behind such 1990s debacles as the Royal Ontario Museum’s exhibition Into the Heart of Africa or the Garth Drabinsky production of Show Boat – both touchstones for Black activism in Toronto and throughout Canada. Her anger – then and now – is palpable, but she channels it through precisely the kind of evidence-based analysis that detractors claim is lacking in protest movements and literature.

The book’s masterpiece is a new personal essay titled “Riding the Bus with Rosa in Morocco,” in which Philip recounts how the local operators of a tour through the desert tried to have her removed from her seat to make room for two young white women. Philip directs her gaze to Morocco – a country on the northwestern tip of Africa that distances itself from the continent below it – and its complicity in the slave trade in the Arab and Muslim world, which predates the transatlantic one. She’s aware of the need to build alliances with other colonized subjects who “have felt the brute force of racism,” but critiques the Moroccans’ own brand of anti-Black racism, which, in her assessment, colludes with and validates white supremacy.

In a book that also addresses Philip’s roots in the Caribbean, this sideways glance at Morocco proves that while contexts may differ, the vulnerability of the Black body persists across time and place.