My Road from Damascus 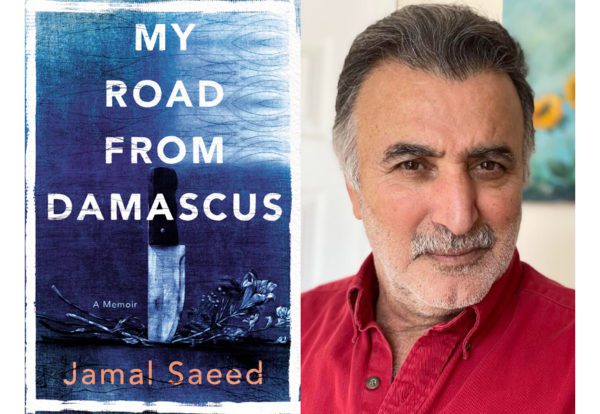 Jamal Saeed’s memoir My Road from Damascus begins not in Damascus, but in a small village in northern Syria named Kfarieh (often spelled as Kafriyah) several hours away from the capital.

Saeed spends the first 17 years of his life surrounded by his parents and grandparents, nestled in the lush landscape of the region, and especially along the river that runs through Kfarieh. It is here that Saeed learns to walk, to run (after a bird, for example, into a forest until he becomes lost), and to explore, not just his village, but also the geopolitical events and political theories that shaped his country. Saeed’s youthful exploration eventually leads him to join movements protesting Hafez al-Assad’s dictatorship. In turn, this involvement brings on the scrutiny of intelligence agents intent on eradicating the regime’s dissenters, compelling Saeed to move to Damascus in 1977. Despite his relocation, he is unable to outrun the agents and is eventually imprisoned, first from 1980 until 1991, and then again briefly during the winter of 1992.

In My Road to Damascus, Saeed recounts (with the occasional accompaniment of photographs and sketches) the harrowing, horrifying, heartbreaking time he spent as a political prisoner in the al Qala’a and the notorious Tadmur prisons. He writes of how the regime and its treatment of him and his loved ones continues to haunt him after his release – even after finding asylum in Canada in 2016. Saeed revisits his hometown often over the course of the book – just as he did in his mind during imprisonment – to reinforce its beauty in contrast to the prison’s brutality and the unfathomable impact this violence had on him.

Oscillating between various points and places in Saeed’s life, My Road to Damascus is a non-linear narrative of loss in all its various shapes, sizes, and levels of severity. There is the loss of Saeed’s humanity and dignity as he is denigrated by prison officers while they inflict physical violence upon him during his arrest and incarceration; the loss of people who died or moved on with their lives in his absence; and the loss of many individuals who were arrested and never heard from again – both before his arrest and after his release. There is also the loss of peace and well-being: the trauma of prison and the aforementioned losses continue to resurface in Saeed’s life.

But the book is also a story about love. Saeed tells of the love that binds him to his parents, his grandparents, and his village. There is the love that he finds with his co-worker, and eventual wife, Rufaida. There is the love for the family Saeed builds with Rufaida that gives him the strength to leave everything he has known in order to keep them safe. And there is the love shown by veritable strangers who readily embrace him and his family in their new home.

Written in poetic prose in which the reader can trace the cadence of Saeed’s native Arabic – and which illustrates why Syrian philosopher Antun Maqdisi once likened Saeed to Maupassant – My Road from Damascus explains that love and loss are intertwined and shows how the former can help us withstand the latter.