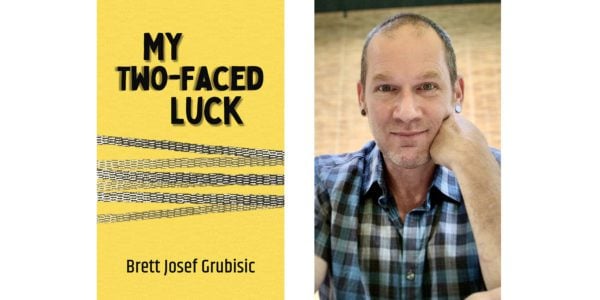 “Fifty-nine-year-old homosexual found guilty of murdering an elderly widow at sea on a cruise ship.” This snippet from a criminology reference text provides a starting point for the novel My Two-Faced Luck, Brett Josef Grubisic’s fictional reimagining of the actual life story of a convicted killer. Formally inventive though occasionally convoluted, the novel focuses less on the crime itself, instead shedding light upon the experience of same-sex attraction in times prior to the gay liberation movement.

Grubisic, a former lecturer at the University of British Columbia, is the author of four previous novels, including The Age of Cities, a finalist for the City of Vancouver Book Award. My Two-Faced Luck is the final title in a trilogy set in or near fictional River Bend City, B.C., and is loosely based on the life of Robert Frisbee, who killed his long-time employer, an aging socialite, after having had a sexual affair with her husband for years.

The novel opens with an editorial pitch letter from a woman named Seerat Gill to a Toronto publisher. Back in 1990, Gill, then a nurse at a prison near River Bend City, was left “a jumble of cassette tapes in a plastic bag” by a dying inmate who had been imprisoned for murder. Three decades later, she transcribes them, using guesswork to impose a logical and temporal order to the narrative. The manuscript she creates from the killer’s words – and submits for publication – forms the bulk of My Two-Faced Luck.

Much of the story concerns the narrator’s sexual awakening and romantic affairs, beginning as a teen, when he is pursued by much older men. Coming of age in the wake of the Great Depression, he describes “a fraternity that wasn’t visible to the naked eye,” based on lingering glances and other signals that indicated same-sex desire. But the rise of the House Un-American Activities Committee breeds fear and impels secrecy; as the narrator declares, “I could have been arrested at any moment, snatched right off the street and thrown into a cell.” Conscripted during the Second World War, he marries a female colleague in the military secretarial pool to avoid exposure. Throughout, Grubisic peppers the text with references to popular music and historical events to further set the story in context.

Occasionally, the novel’s form and structure impede narrative drive. The monologue can be meandering and repetitive. Possibly by design, to reflect the notion of tapes transcribed in the wrong order, the narrative sometimes jumps around erratically, which works against maintaining the reader’s attention. At one point, for instance, there is a dramatic revelation about a sexual affair key to the storyline – but instead of further details, what immediately follows is a reiteration of material about the narrator’s childhood that has been amply covered. The narrator is also prone to overuse colloquialisms that can grate. These are distractions to an otherwise enlightening and engaging read.