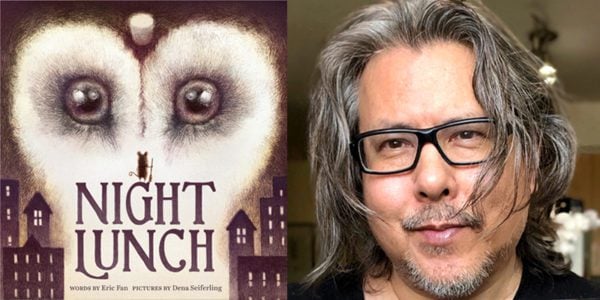 It’s difficult to create stories that plug directly into the looping logic of the minds of very young children that are also smart and engaging enough for adults in charge of bedtime reading. It’s equally difficult to create the kind of picture book that feels timeless, quiet, and subtle without losing the interest of children often accustomed to books that deliver their tales with the literary equivalent of a T-shirt cannon.

Toronto’s Eric Fan and Calgary’s Dena Seiferling ably perform both feats in Night Lunch. Fan, a writer and illustrator of the celebrated Fan Brothers (The Barnabus Project), brings much of the sensibility of his better-known partnership to his writer-only debut. Through verse with the cadence of a nursery rhyme, Night Lunch tells of a late-night food cart – drawn by a single white horse and operated by an enormous barn owl – that feeds the animal denizens of a Victorian city. Fox gets a mince pie, Badger a sandwich, and two bats are offered a bun with sausages and peppers. Mouse is too nervous to place an order, so the owl sets a table for both of them that is stacked high with cakes, pies, and tea. And that is that: “Clip clop, the morning sun … The night lunch cart rolls on.”

Seiferling’s hand-drawn images are a perfect fit with Fan’s simple tale. The colours are muted – mostly very pale browns, yellows, and reds. There are shadowy creatures with glowing eyes in the background of many of the scenes, but the effect is more haunting than scary. The hungry animals are very lightly anthropomorphic (a cat wears pearls, a possum has a handbag) yet retain their animal-ness. This reviewer can’t help but wish the text itself – which, perhaps for better readability, is printed on a white bar that runs along the bottom of each page – was better incorporated into the images themselves, but that’s a very minor complaint about a book as quietly engaging and carefully executed as this one.