★Night of the Raven, Dawn of the Dove 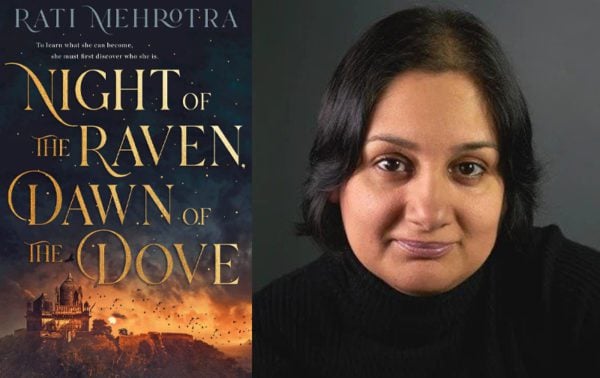 Young bodyguard Katyani bears the responsibility of protecting the kingdom of Chandela’s royal line – a weighty enough task to shoulder even without monsters lurking at every turn and an inescapable life-debt she doesn’t truly understand. Readers expecting a cookie-cutter hero’s journey narrative from Night of the Raven, Dawn of the Dove will find their expectations pleasantly subverted by this brutal and tangled tale.

In her YA debut, Rati Mehrotra deftly weaves medieval India into a compelling high-fantasy world brimming with cunning spirits and blood-soaked betrayal. The worldbuilding is sure to be a delight for readers craving new stories of kingdoms and heroes, delightfully distinct from the countless European-inspired realms that have flooded the genre for decades.

Katyani’s challenges as she navigates the rigidity of her training under the famed Acharya Mahavir are enough to spark the interest of any fantasy fiend, as are her interactions with his inscrutable son, Daksh. But where Night of the Raven, Dawn of the Dove truly shines is in its breakneck descent into the snake pit of court politics. It takes this descent seriously; no character is safe from shocking revelations, hairpin turns, and the potential for an untimely end.

In a story of kingdoms and magic, there’s little more thrilling for a reader than a protagonist surrounded by characters who cannot be trusted. In Night of the Raven, Dawn of the Dove, we have this in spades. Katyani grapples with the seemingly impossible, expected to reconcile Acharya Mahavir’s lessons of ethics and morality with the grisly landscape beyond his remote training centre’s walls. Meanwhile, as she risks her life for Queen Hemlata and Princes Ayan and Bhairav, the lines of love and captivity are blurred. Is it possible for Katyani to love someone who holds her life in their debt? Mehrotra introduces a heroine who doesn’t truly know herself – but when she learns who she is, kingdoms will shake.

Assassination plots thicken, cunning spirits scheme, and bonds are broken and reforged. The novel is an immersive read that captures the twists and turns of an epic within a compact stand-alone. Mehrotra has a knack for ambush scenes that genuinely surprise. After reading her debut, one might find oneself checking around corners for a monstrous vetala or daayan and walking a little quicker through that shadowy grove of trees. But Night of the Raven, Dawn of the Dove thrives on the fact that true monsters might not have fangs or claws but bear the faces of friends instead.