★Not Talking About You 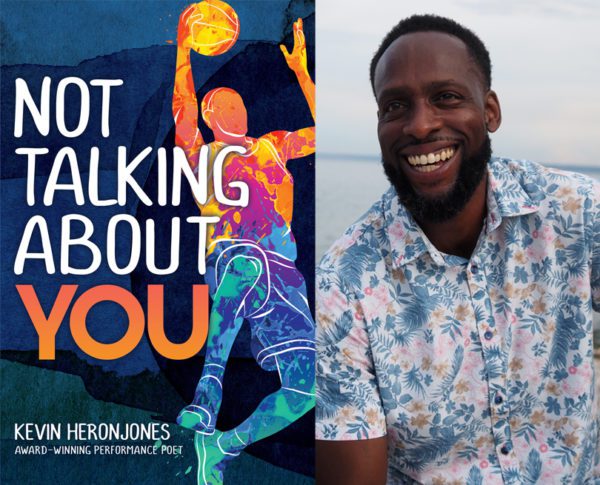 When Khalil’s family moves from Toronto to Milton, he finds himself navigating a new middle school and wondering where exactly he might fit in. As a Black boy among a predominantly white student population, Khalil sees himself as a minority for the first time. Cameron, the school’s confident blond basketball star, befriends him and, even though Khalil hasn’t played much basketball puts pressure on him to join in and even try out for the team. As Khalil finds his groove playing for the school team, some of Cameron’s comments and behaviours contribute to an escalating unease that Khalil attempts to ignore. Could Cameron actually be racist? As the tension builds and events crescendo, Khalil is torn between doing what is easy and doing what is right.

Kevin heronJones cuts right to the bone in this well-balanced novel. He has crafted a story that will pull in teenagers with its account of school life on and off the basketball court. While this is definitely a story for basketball fans, it plays well even for those who are unfamiliar with the game. The storyline is elevated  through the sensitive portrayal of each of Khalil’s social interactions and the complex emotions they provoke. The characters all ring true: Cameron’s sway over the friend group is recognizable, his overconfidence alarming, and the way he railroads Khalil into doing things is familiar.

Many readers will also recognize Khalil’s feelings: the awareness of being invited in while simultaneously excluded; the feeling of being caught off guard when you realize someone is casually stereotyping you; the mental effort of coming up with excuses for other people’s behaviour; and the tension between wanting to fit in and knowing you should call someone out. It’s a huge burden for a child to carry, and heronJones makes us feel the weight of it. Children second-guess themselves all the time, so having their experiences and emotions validated here is empowering. For those who find themselves witnessing racist behaviour, this book will expand their awareness of what a friend should be and what a friend should do. For those experiencing racism, this book offers them a way forward while acknowledging the courage and emotional effort required to stand up to their friends.