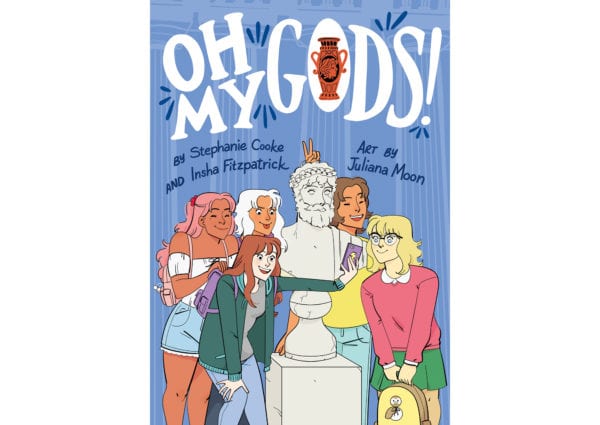 The debut middle-grade graphic novel Oh My Gods!, co-written by Toronto comic book scribe Stephanie Cooke and New Jersey–based Insha Fitzpatrick, delivers light-hearted lessons in friendship and ancient mythology. In this promising series opener, 13-year-old Karen heads to Greece to reconnect with Zed, her eccentric and über-wealthy father. On her first day at Mount Olympus Junior High, Karen is confused by the “fancy-arts school” amenities like the Pegasus stables and is stumped by curriculum that includes a recitation of “all the members of the Grecian oligarchy of 384 BC.” When she runs into a centaur in the cafeteria, she naively figures the student body must be big into method acting. Karen is equally perplexing to her classmates, several of whom ask her, “Sorry, what’s your name again? Is that short for something?”

While the running gags are funny and lay the necessary groundwork, Percy Jackson–savvy readers may wonder what in the River Styx took Karen so long to realize she is actually hanging out with the immortals of the Ancient Greek pantheon and that she herself is a demigod. Despite the generation gap, Gen-Z Karen bonds with Zed, who is a caring, enthusiastic parent with a penchant for dorky dad jokes and vintage technology, like the pager attached to his belt. The plot hits its stride when the action turns to solving the mystery of who is turning students into stone statues. 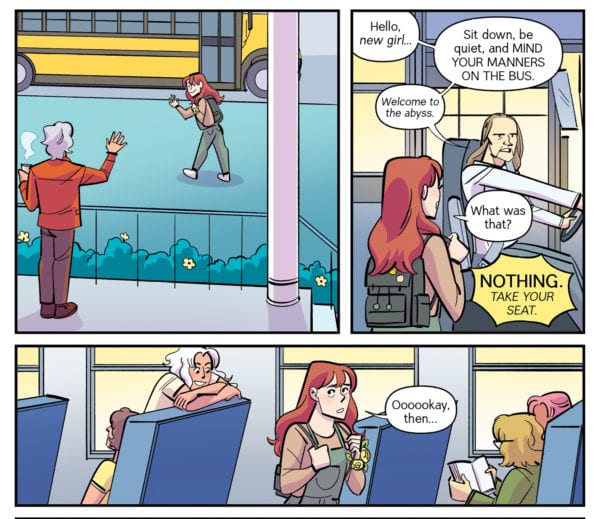 Juliana Moon’s cheery cartoon artwork features clean lines, filled in with bright, saturated colours. Karen’s new pals – the Greek Gods Squad – are well scrubbed and relatable, including hunky, long-haired, guitar-playing Apollo (Pol) and his sister Artemis (Art), a straight shooter in both her no-nonsense attitude and her archery skills. There’s a handy crib sheet on the main characters that resembles notes passed in class, adorned with doodles and Karen’s true feelings scribbled in the margins.

In a tidy and satisfying resolution, Karen accepts herself (“The scariest thing in the world is being different. But sometimes … it’s pretty great”) and learns when you get to know someone, you often discover another story behind the standard myth.