Oldness; or, The Last-Ditch Efforts of Marcus O 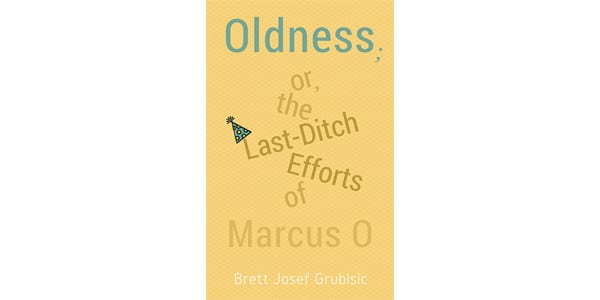 If there’s a single thing that inspires him, it’s revenge. After seeming to suffer a slight (a minor slight, which may, in fact, not even have been directed at him) at the hands of his younger departmental colleague, Judaea, Marcus devotes himself to vengeance. “Best served cold, he thought. But exactly how? Like psychics, proverbs traded on vagueness.” So begins Marcus’s reign of terror, which includes ignoring Judaea in departmental meetings, muttering about her to anyone who will listen, dissenting from her plans for the department, and, brace yourself, eating part of her salad every day. “Dyspeptic declining years” indeed.

Rendered in the third-person but rooted entirely within Marcus’s awareness, Grubisic’s novel plunges the reader deeply into the sad limitations of the central character’s view of the world – his scorn for his culture reading as a satirical take on contemporary society, dissecting everything from social media and dating rituals to academic gamesmanship and methods for dealing with first-year students. Grubisic’s prose is vigorous and vital even when probing the arcane corners of Marcus’s knowledge, and he unfolds Marcus’s history (and his genuine nature) with a straight face, allowing the reader to develop an empathy for the man even as they recognize his limitations.

Frequently hilarious, genuinely thought-provoking, and surprisingly moving, Oldness is a vivid, multi-faceted portrait of a man refusing to go gentle into that good night, lashing out petulantly and helplessly at a world that has passed him by.