On Opium: Pain, Pleasure, and Other Matters of Substance 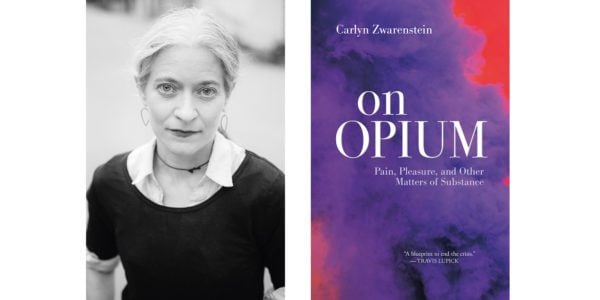 In the final chapter of On Opium: Pain, Pleasure, and Other Matters of Substance, journalist Carlyn Zwarenstein quotes Antonin Artaud: “We know the soul’s dosages, its sensibilities, its marrows, its thoughts. Leave us in peace. … We ask only for a respite from suffering.”

The words are from a 1925 polemic against the criminalization of drug use. Artaud’s acerbic argument offers a cogent distillation of Zwarenstein’s central assertion: that the use of narcotics is not a problem but a solution, and that the legacy of the U.S.’s misguided war on drugs has been to increase suffering and create a class of criminals, mostly among impoverished, racialized, mentally ill, or otherwise marginalized individuals.

Like the notorious French playwright, Zwarenstein derives authority from lived experience. She uses an opioid medication called tramadol to counter chronic pain from ankylosing spondylitis, a degenerative spinal condition. Zwarenstein previously wrote about her experience in her short 2016 book, Opium Eater: The New Confessions, a revised version of which forms the opening section of this new work. Zwarenstein broadens her focus here to address how misguided policy from the legal, medical, and pharmaceutical establishments has forced large swaths of people to look for pain relief on the black market and led inexorably to the current crisis in overdose deaths.

Many of Zwarenstein’s contentions are invigorating. She takes issue with the American economists who popularized the glib shorthand “deaths of despair” to describe the fate of working-class people driven by circumstance to suicide or overdose. She introduces us to drug users who have experienced varying levels of housing insecurity, domestic violence, poverty, and illness (both mental and physical) only to be dismissed by an establishment that punishes them for trying to alleviate their pain.

Zwarenstein posits a distinction between physical dependence on drugs and addiction, though she never illustrates this clearly. She does, however, deconstruct the idea of the stereotypical “junkie” and replace it with individuated portraits of articulate, sensible users whose risk of death is exacerbated in direct proportion to the prohibitions placed on drugs. As an argument for following Portugal’s lead in decriminalizing all drugs, On Opium is undeniably reasonable.

Despite a tendency toward repetition in its latter pages, Zwarenstein’s volume is a valuable tool for the promotion of harm reduction. When so much conservative rhetoric is based on an ideology of stoicism, it’s bracing to learn that Roman emperor and Stoic philosopher Marcus Aurelius was also an opium user. “Chronic pain is always endurable,” Aurelius wrote in Meditations. “[T]he intelligence maintains serenity by cutting itself off from the body.” Easily said, for an emperor. Then again, as Zwarenstein writes, “When they teach stoicism to pain patients, they always forget to mention the opium.”