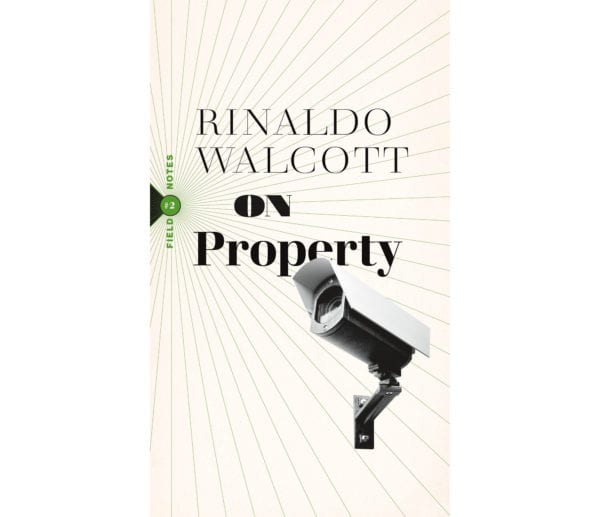 Rinaldo Walcott locates his contribution to the Field Notes series on current issues, On Property, in the present political moment, while using historical references and events to argue for the abolition of police and property. For Walcott, a professor at the University of Toronto whose research areas include Black diaspora cultural studies, “property is a problem.” Using the “communal philosophy and anti-capitalist stance” of Rastafarianism and “ideas expounded by radical Black feminism,” Walcott builds a case for why abolition of property would lead to the “transformation of our society as we know it.”

Walcott agrees that while abolition might be a revolutionary – and even radical – idea, the basis for it lies in the history of slave ownership and “Black unfreedom.” Referring to the work of cultural theorist Fred Moten, he argues that it is “the gap between the commodified ownership of the slave and the slave’s refusal of this status … that gives birth to abolition as a reimagining.” Drawing on Katherine McKittrick’s essay “Plantation Futures,” Walcott argues that “the ideas forged in the plantation economy continue to shape our social relations.” Modern policing, as a result, is an evolution of policing Black people as property.

The murder of George Floyd at the hands of the Minneapolis police on May 25, 2020, sparked a global “battle cry to defund and abolish the police.” Walcott points out that it was on the same day in Manhattan that a white woman, Amy Cooper, called the police – lying about her life being in danger – on a Black man, Christian Cooper (no relation), when he asked her to put her dog on a leash. Both incidents were caught on camera, which helped reveal the ways in which Black people are under constant surveillance by the police and self-appointed white authorities. “These recordings have become a genre of their own,” writes Walcott, “whereby [these white people] refuse to let Black people live their lives, with all the assumptions about Blackness and property integral to these interactions.”

The riots that followed the murder of George Floyd were “the latest instalment in a long history of such uprisings.” Going back to plantation slavery, riots “garner the attention of the state authorities in a way that … peaceful protests do not.” Regardless of location – Canada, U.S., U.K., France – the race riot “is a signal flare marking a deep-seated refusal to carry on as usual.” For Walcott, the word “riot” is not a pejorative but rather is seen “as embodying a tradition of Black refusal and resistance.”

Walcott concludes his case by asking for a new ethics of care and economy that does not keep feeding into the incarceration system, a system rigged to continue Black suffering while talking about alleviating it through superficial hashtags like #OscarsSoWhite, #BlackGirlMagic, and #BlackBoyJoy. These hashtags represent “access to the crumbs of capital” for Black people in Canada and elsewhere. Walcott ends with a resounding “yes” to literary scholar Saidiya Hartman’s question in a recent essay: “Is abolition a synonym for love?” It is a question we must ask ourselves after reflecting on the ways in which we, too, are complicit.