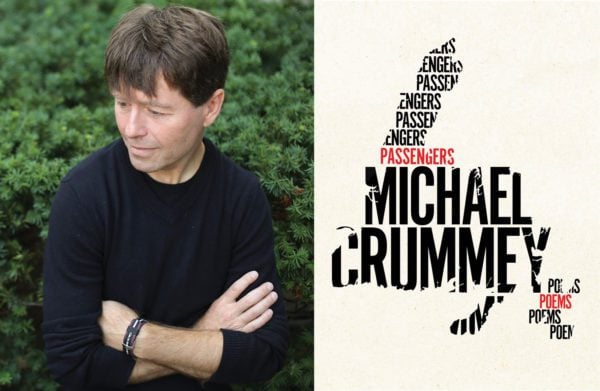 “A hundred feet of line is as far / as we ever manage to travel / from our selves,” declares the speaker in “Tranströmer on Signal Hill,” the second poem in Michael Crummey’s Passengers. The lines call to mind the proverb “Wherever you go, there you are” and hint at the themes of transience and alienation that run through Crummey’s sixth collection of poetry, a book of peregrinations cast through the lens of different poetic personae.

The first section, “You Are Here: A Circumnavigation,” is a work of homage by pseudo-translation, a series of poems written from the perspective of deceased Nobel Prize–winning Swedish poet Tomas Tranströmer. The second sequence, “The Dark Woods,” moves with an unidentified subject through a trip across Europe. “Devilskin,” the final grouping, is a series of prose poems voiced by Satan, who observes Newfoundlanders through the centuries after arriving as “a stowaway on a wooden ship at the tail end of the Middle Ages.” The collection closes with “A Departure 11/04/2019,” a two-page poem set off on its own.

Despite the book’s varied locales, subjects, and speakers, some common threads unite the collection. Crummey is particularly interested in transience, and in the position of the foreigner/stranger/outsider (one thinks of the multiple possible translations of the French “étranger,” as well as the “passengers” of the book’s title). “No tourist escapes cliché” opens “Tranströmer on Signal Hill,” a line repeated later in the second section’s “Stockholm.” Through the figure of the outsider, Crummey explores (among other themes) a profound sense of alienation from one’s surroundings – a kind of alienation experienced not just in travel but even in one’s own home. So the speaker in “Via Heathrow,” the opening poem of the second section, echoes the first lines of Dante’s Inferno, “In the middle of the journey / I came to myself in an alien wood.” So too the Devil – that angel cast out from Heaven – “still wanders among the trees above that shoreline, searching for some lost soul who can speak its name” in the “Devilskin” poems.

Curiously enough, this sense of estrangement is most keenly felt in “You Are Here: A Circumnavigation,” which is set in Crummey’s native Newfoundland and Labrador. Of the book’s three sections, this one is the longest and the most successful. In adopting Tranströmer as a poetic persona, Crummey grants himself a degree of distance from the setting. Appropriately, the voice of this section is slippery, combining the awe and bafflement (and, sometimes, judgment) of a visitor with the knowledge of the landscape and history of a local. Eight pages of “Translator’s Notes” at the end of this section provide further insight into the poems’ details and allusions. Despite the paratextual matter (in addition to the notes, “You Are Here” begins with a short preface presenting the Swedish poet), it wasn’t always clear why Crummey had chosen Tranströmer in particular to occupy this outsider role.

Stylistically, however, Tranströmer’s influence on the author is noted in the impressive number of unusual but apt similes and metaphors. Details in the speaker’s surroundings take on new life: in “Tranströmer on Arrival, St. John’s International,” a plane “approaches the runway and sheers off / like an animal at full gallop shying from a fence,” while in “Tranströmer on the Bell Island Ferry,” “Waves clamour at the vessel’s skirt like children” and “mine shafts radiate from the island’s hub / like the spokes of an enormous wheel.” Elsewhere, a similar attention to figurative language allows Crummey to expand on more philosophical questions: “Grief is a sweater knit by the dead / folded and set on the bedside table while you sleep.”

In the opening section’s observation of his home province and in what follows, Crummey strikes a compelling balance in tone, writing with both affection and a note of wearied cynicism about the world around him.